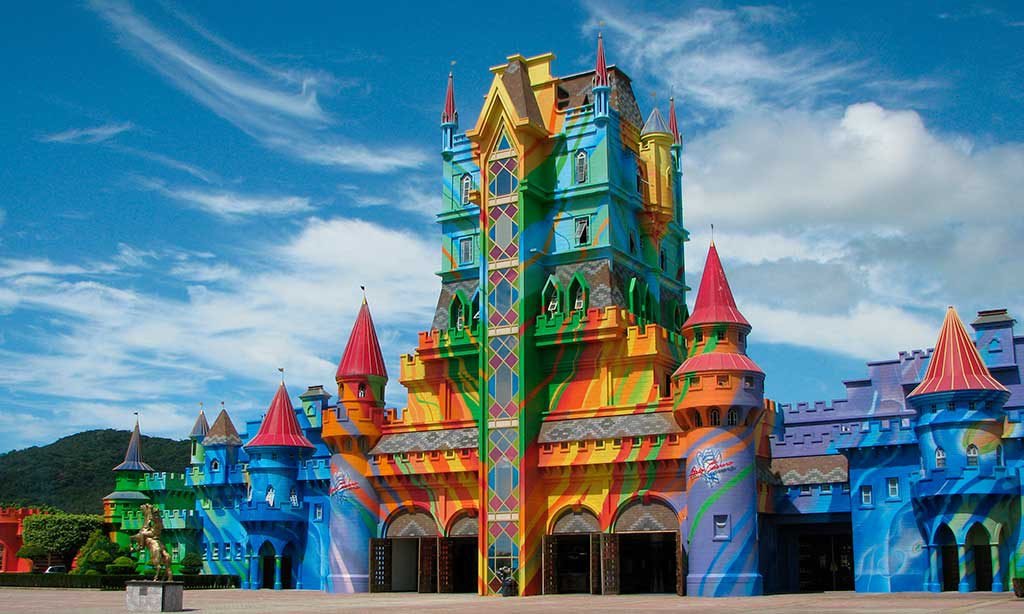 O Beto Carrero World is a theme park located in the municipality of Penha, on the northern coast of the state of Santa Catarina, Brazil. Inaugurated on December 28, 1991 by its creator João Batista Sérgio Murad, artistically known as Beto Carrero, the park occupies an area of ​​14 million square meters. From the BR-101, it is just over six kilometers from the entrance to Beto Carrero World, also on a double asphalt lane. It is considered the largest theme park in Latin America and in 2014 it was ranked as the sixth best theme park in the world by users of the TripAdvisor website.

The Beto Carrero World complex has a motocross track and an international kart track designed by the German Herman Tilke. The karting track has bowling alleys, shops and restaurants. In 2011 it hosted the 500 Miles of Kart, an important event that brings together the most important celebrities in the world and in Brazilian motorsport. The Autodromo Internacional is already planned and construction is expected to begin in the coming months. After the failure to introduce the Formula 1 series in 1996, it was possible for this circuit to host the Brazilian Formula 1 Grand Prix. However, the contract with Autodrom Interlagos was extended for another 10 years in 2000.

João Batista Sérgio Murad, from São Paulo, who spent 16 years almost full-time in the role of fictional cowboy Beto Carrero, central figure in a park opened on December 28, 1991, started with little more than a Ferris wheel and improvised shows under circus capes. Today Beto Carrero World is a themed entertainment complex with theaters with daily shows, extreme games and a zoo. More than 1,100 people work there, including artists and staff.

Debt and accounting problems brought Murad to the pier in a lawsuit filed by the IRS, and the family business had a rough year. In 2001, among the problems, Murad decided to change management. The park was managed by professionals trained by Fundação Dom Cabral of Belo Horizonte. Their participation in administrative decisions was limited to a daily lunch with the managers. Beto Carrero loses only the turnover in favor of Hopi Hari, in Vinhedo, in the rural area of ​​São Paulo, which in 2006 reached a turnover of 66 million reais.

During BNF 2012, the park presented an important international alliance in the Brazilian entertainment market. The agreement covers new attractions developed with two international film companies, Dreamworks Animation and Universal Studios. Dreamworks specializes in animations such as Shrek, Kung Fu Panda and Madagascar. Universal has made great movies like The List of Schindler, ET, King Kong and Shark. The park is divided into seven different areas, with features ranging from rides and shows to the full “region” theme.

Beto Carrero World is a great travel alternative for children and the whole family. This makes it the largest theme park in Latin America. Here you can learn more about attractions, values, opening hours, departure times and other important tips. One of the first questions to ask is: What is the best time of year to visit Beto Carrero World? So let’s say this all year round, because Brazil is a country that offers trips without extreme temperatures, as in the northern hemisphere.

Beto Carrero World currently has several attractions and a large area. However, this choice is very special and should be made according to your travel style. Finally, there are toys for very young children, others just for adults. This way you can specify a good filter in the options. The park is even focused on the celebration of its 30 years in 2021. Until then, other toys and themed antennas will be inaugurated, starting in the second half of this year (2019).

The park offers different types of tickets: from 1 to 3 days, children, adults and seniors. In addition, promotions are published throughout the year. For this reason, the prices of the main tickets as of July 2019 were lower than those of the main tickets.

However, we recommend that you click here and always check for current offers or price changes that may be made without notice.

Beto Carrero World, like the parks in Florida, offers the Fast Pass, which works as a skip-the-line, and the VIP Access, which gives tourists access to the best places for the shows.

The Beto Carrero World Fast Pass is not free, unlike the one offered by Disney. As with Universal, the famous well must be purchased separately. The amount is BRL 110 (updated in July 2019).

How it works: The visitor is identified by a wristband that is delivered at the time of purchase of the card or by the Internet purchase voucher. This purchase/exchange then takes place directly at the entrance to the attraction, at Castelo das Nações.

Additionally, there are other outlets for this attraction throughout the park. But please note: the number of fast passes per day is limited. So, if you are in high season, buy yours right at the entrance or if you buy online.

The Fast Pass can be used on eight rides, with a double limit for each ride. Then look at the attractions and next to them the heights visitors need to climb:

In this way, in these toys the bracelet is directed to another entrance where there may be a line much smaller than the conventional line or even zero. The Fast Pass is worth it for those who want to enjoy all the toys, especially during high season. One solution to not paying for the Fast Pass is to use the Single Rider option, where you can hop on a shorter line and occupy a free space at an attraction. The advice is for those who do not embark alone.

Guaranteed access allows VIP access to Beto Carrero World shows, as popular as the rides. For this reason they are always well attended and this type of structure helps with logistics and not only offers privileged locations. The guaranteed access fee is BRL 25 per show (updated July 2019). For all shows the daily price is R$ 88. Is it worth it? If you really want to sit in the front rows of a particular show, especially in peak season, it’s worth it. However, in low season, you arrive on average 30 minutes before the show starts and the seat in front of you is guaranteed!

The Beto Carrero World park offers snack bars, restaurants and food and beverage outlets. In addition to this property, lunch is served during the Excalibur show. Want more options? Visit the dining area on Avenida das Nações, which offers variety for the whole family. Many people arrive at Beto Carrero World by car, so the question arises: is there private parking? Yes there is! The current daily rate for cars in the parking lot is R$ 50.00.

Beto Carreto World has a Hot Wheels themed space, however keep an eye out: only the Hot Wheels Epic Show is included in the passport.

On Avenida das Nações, tourists can take pictures with the famous character Po from the movie Kung Fu Panda, Megamente and Metro Men. Take a look at the times the characters will be in places. See information on signs or directly at the Castelo das Nações customer service.

One of the biggest roller coasters in Latin America, Star Mountain has an initial drop of 35 meters high!

One of the most radical attractions in the park, the Big Tower has a height of 100 meters, the toy is considered one of the highest drop towers in the world! The height is equivalent to a building of more than 30 floors.

Beto Carrero World has a special area themed after the movie Madagascar! In addition to themed toys, such as Crazy River Adventure, there are shows, food court and space for pictures with the characters!