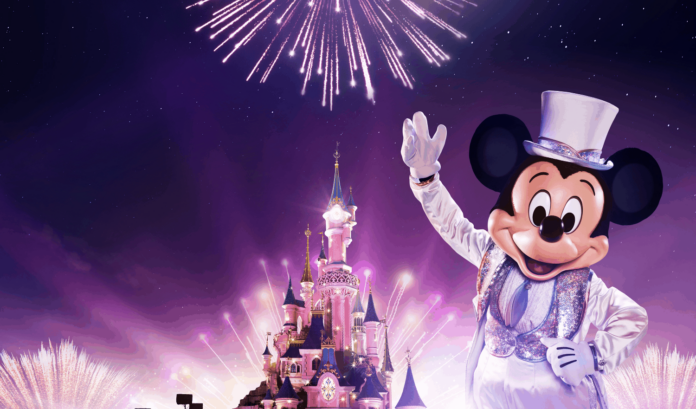 Thinking of ringing in the new year away from home? We propose a magical plan perfect for all types of travelers: families, couples, groups of friends or even solo travelers who want to enjoy a special New Year’s Eve. Travel to Paris to start 2023 with Mickey, Minnie and all the Disney characters. At Disneyland Paris they have prepared an impressive New Year’s Eve party full of magic. We tell you all the details about the New Year’s Eve party at Disneyland Paris. You dare? 🥳

All information + tickets for the New Year’s Eve party

What to do at New Year’s Eve at Disneyland Paris

From November 12 to January 8, Disneyland Paris dresses up with the most magical christmas decorations. The entire park is full of details that will make you spend your mobile battery taking photos. There is also no missing Christmas tree huge at the entrance, its lighting every night is a precious moment. The setting does not end there, you can also shop for special edition holiday Disneyland food and souvenirs.

Beyond the Christmas decorations, during the New Year’s Eve party at Disneyland Paris there will be five different environments for every taste. You can start the year with music and surrounded by fairytale settings.

The Disney characters will put on their best clothes to celebrate New Year’s Eve with all the visitors of Disneyland Paris. Mickey, Minnie and all their friends will wear sparkly outfits designed for the occasion. You can greet them in an extra magical night parade, the last of the year! Seeing the illusion faces of the little ones interacting with the characters is a real gift.

Go up to the best attractions of Disneyland Paris

In addition to the encounters with characters and a magical setting; you can continue enjoying all the attractions during the New Year’s Eve party at Disneyland Paris. They will be open until 2 in the morning and there is something for everyone: smooth rides with Peter Pan or the Pirates of the Caribbean, a visit to the haunted mansion, an adrenaline rush with the speed of Star Wars Hyperspace Mountain or a turbulent passage through the Indiana Jones universe.

Fireworks show to ring in the new year

There are many cities that put on impressive fireworks displays to welcome in the new year. At Disneyland Paris they could not be less! Can you imagine welcoming 2023 with a light show, music from the most famous Disney movies, projections of your favorite characters and fireworks over Sleeping Beauty’s castle? Sounds like a completely magical plan for midnight. It is an exclusive show created solely to celebrate the beginning of the year. If you have already seen a night show in the Disney parks, you will know that they are authentic cracks y They get the whole family excited.

After the high of the show, you can continue enjoying Disneyland Paris during the first two of the new yearuntil 2 in the morning.

Until what time is Disneyland open on December 31

The New Year’s Eve party at Disneyland Paris starts at 8:30 p.m. and ends at 2 a.m.. During those hours, you will be able to go up to the attractions of the park and enjoy all the special celebration events that we have explained in the previous point.

To visit either of the two Disney parks during normal hours on December 31 or January 1, a ticket to the party is not enough. If you have contracted a hotel + tickets package, you will already have the normal tickets included. If you have looked for accommodation on your own, you will need to buy tickets to access Disneyland Paris.

How to Get Cheap Disneyland Paris Tickets: Tips and Tricks

The price of the New Year’s Eve party at Disneyland Paris is €109 per person. All adults and children over 3 years old need their own ticket. Children under 3 years old enter for free and do not need any special ticket 🙂

Book your ticket to start 2023 at Disneyland Paris

If you stay at any of the Disney hotels the night of December 31, you will have a 15% discount on tickets to the New Year’s Eve party at Disneyland Paris. It really is the best option, since when you leave the park at 2am the public transport to go to other hotels outside the park no longer works. In addition, Disney hotels have a lot of advantages: a unique setting, character breakfasts, early entrance to the parks, transfers to the door of Disneyland Paris and expert assistance at all times.