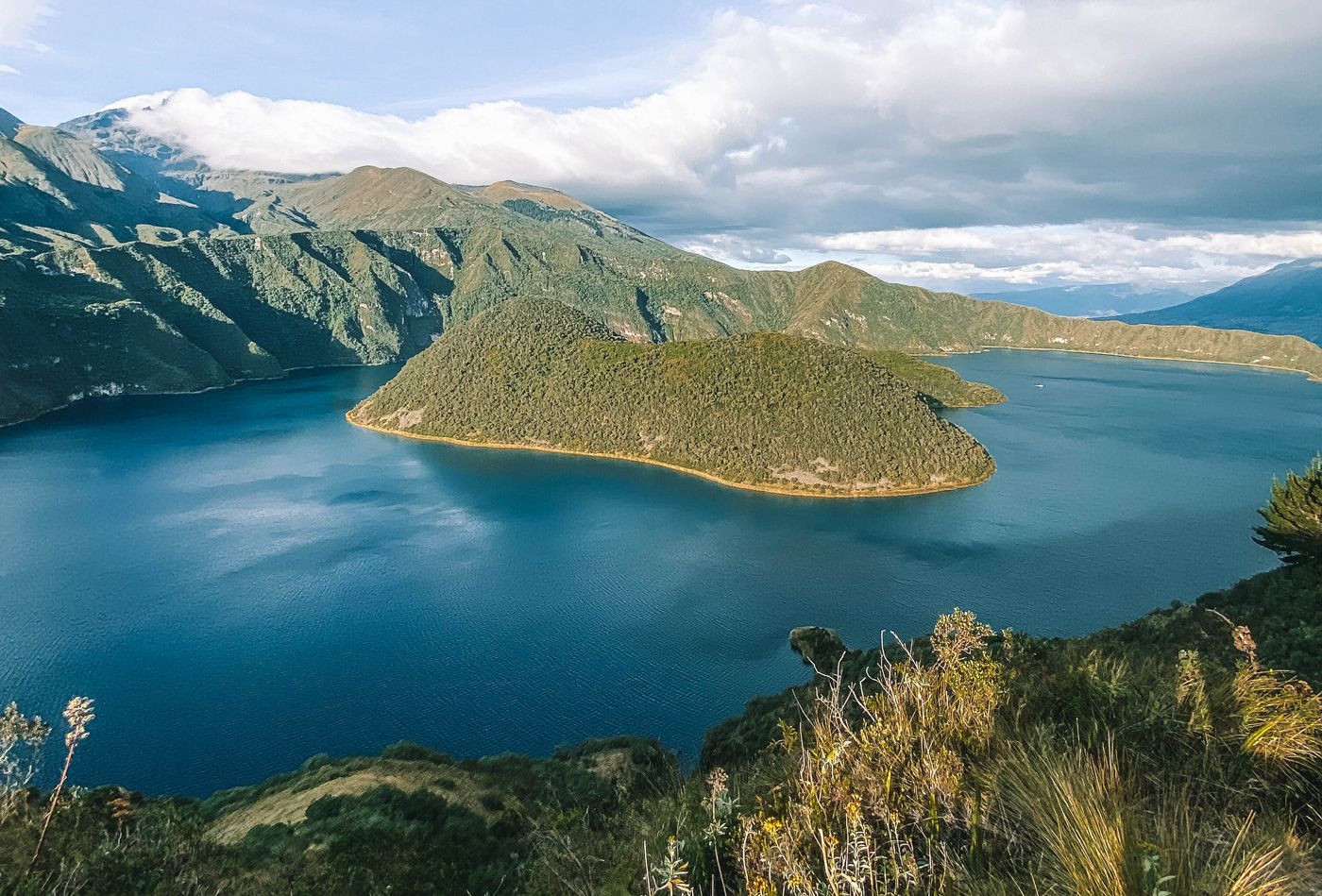 You will not lack things to do in Ibarra. The “Ciudad Blanca” is one of the most interesting to see in Ecuador. And it’s only a 2 hour drive from Quito! Its white facades, with which the rebuilt city was blessed in 1872 after the 1868 earthquake, are one of its main attractions. But the best is in its surroundings! Especially its multiple loopholes. In this post we tell you 15 things to do in Ibarra so you can get to know the best of the city and the province.

25 essential places to see in Ecuador

On this map you will find marked the best things to see in Ibarra.

15 THINGS TO SEE AND DO IN IBARRA (ECUADOR)

This lagoon is the main attraction of Ibarra. Although it is not in the city itself, it is relatively close. It will only take about 45 minutes on a very well paved road! Next to Quilotoa, it is one of the most beautiful lagoons in Ecuador. Its volcanic crater is filled with water, but the most curious are the two islands that emerge from the lake.

Why is it called Cuicocha? In Kichwa it means guinea pig. And they say that the two islands are shaped like the backs of two guinea pigs. Do you think so too?

The complex is very well conditioned. You can kayak the lagoon or go up to one of the viewpoints to appreciate its beauty. One of the best things to do in Ibarra is to walk the loop that surrounds the lagoon. You will have beautiful views! However, you will need a little time, since there are 12 kilometers in total.

2. Know the history of the Yahuarcocha Lagoon

Ibarra is known as the “White City” but it could also be the city of lagoons. Because in its surroundings there are some very beautiful ones! If you don’t want to go too far, in the same city of Ibarra you will find the Yahuarcocha Lagoon. It is one of the main attractions to see in Ibarra!

If you like to play sports, you can cycle through it along an inhabited lane or even walk. But the most curious thing is to know where the name comes from.

Why is it called Yahuarcocha? In 1486 the Caranquis began a bloody battle that ended with the triumph of Inca Huayna-Cápac. Once his victory was proclaimed, he ordered all the men to be killed. It is said that more than 30,000 people died and their bodies were thrown into the lagoon.

As a result, the waters turned red. Hence, those who witnessed it described it as a sea of ​​blood. That is why it is called Jaguar-Cocha, which means blood and lagoon in Kichwa, respectively.

3. Eat at La Estelita, one of the best things to do in Ibarra

If you want to enjoy an unbeatable panoramic view of Yahuarcocha and the city of Ibarra, we recommend you go up to La Estelita. It is a beautiful hostel. You can go up to eat and even spend a night. You will be amazed at the views!

It is worth going for the day. Many are satisfied with seeing the city from the famous Mirador del Árcangel, but it is much better to get to La Estelita. From above, an unbeatable view of Yahuarcocha awaits you, the mountains that surround it, the Imbabura volcano and the city of Ibarra, among others.

4. Know the Catholic Cathedral of Ibarra

It is the most representative temple of the city and the province of Imbabura. It is in the heart of Ibarra, so you cannot miss it! As a curiosity, the church it was rebuilt after the brutal earthquake of 1868, which destroyed the old structure. The first construction dates back to 1606, although it was made of adobe and covered with straw.

Its interiors are also interesting since they house great works of the Quito School. It is probably not the most spectacular cathedral in Ecuador, but it is worth a visit if you are in Ibarra.

This is one of the most curious things to do in Ibarra. The park is considered to be the center of the city. It has beautiful gardens and It is surrounded by some of the most beautiful architectural works of Ibarra such as the Cathedral, the Episcopal Chapel or the Municipal Palace.l. In addition, it is also a good opportunity to observe the locals.

6. Stroll through “La Ciudad Blanca”, one of the best things to do in Ibarra

I guess it’s not hard to imagine because it’s called “The White City”. If you think it’s because of the color of its facades, you’re right! The historic center of Ibarra is full of old houses with white facades, most of them built after the fatal earthquake of 1868.

Lose yourself in the streets of the historic center and enjoy its architecture!

It is the largest lake in Ecuador. It is located just 40 minutes by car from the center of Ibarra. So it is a very worthwhile excursion. Spending the day in its surroundings is a great option.

Arriving from Quito on the Panamericana, you can stop at the Puerto Lago inn. From there you will have an unbeatable panoramic view and you will be able to fill your stomach with delicious dishes. Even rent boats to see it from another perspective.

Lake San Pablo is even more special, not because of its size, but because of the unbeatable views of the Imbabura volcano. Without a doubt, one of the best things to see in Ibarra.

If you like sports and want to dare with one of the most popular peaks in Ecuador, we encourage you to climb the Imbabura Volcano. It has an elevation of 4640 meters above sea level. Almost nothing! It is a potentially active volcano, although not much activity has been reported in recent years. Climbing it is quite a popular activity for locals!

From above you will have beautiful views of the city of Ibarra, the Yahuarcocha Lagoon, the Cayambe and, obviously, Lake San Pablo.which is right at their skirts.

Is it difficult to climb Imbabura?

You have to be in shape since the slope is steep almost all the way. There is only one technical part just about 200 meters to reach the summit. Is about a rocky area, where precautions must be taken.

The demand is moderate and the total excursion (round trip) usually lasts about 10 hoursalthough it all depends on your physical condition and your experience in the mountains.

9. Visit Cotacachi, one of the best excursions to do in Ibarra

Cotacachi is one of the most important tourist centers in Imbabura. It is only 20 minutes by car from Ibarra and there is a very good quality of life. That’s why it’s full of expats! As its name indicates, it is located at the foot of the Cotacachi volcano.

The most famous thing in the city is leather. There you will find a lot of shops with handicrafts, clothes and leather shoes. So if you are looking for some of this material, you know where to go!

You cannot leave Ecuador without eating fritada. It is one of their most typical dishes! AND Atuntaqui is the Mecca of fried food. In this small town you can try this dish in almost every place. But if you want an easy option, see las Fritadas Amazonas.

15 typical dishes of Ecuador that you must try

11. “Sucking” an ice cream in Chaltura

As Ecuadorians say, we recommend you “suck” an ice cream in Chaltura. It is a super small town on the outskirts of Ibarra. But they make great ice cream! The place is located in a corner of the Chaltura park. You will see that the colors of the facade are unmistakable! The ice creams are 100% handmade and it shows in the taste. You won’t be able to suck just one!

12. Buy souvenirs at the Otavalo Market

You cannot leave Ecuador without visiting Otavalo and its market. It is the most famous in the country! Not only is it a great attraction at the national level, but it is also one of the largest markets on the continent. What can you find there? It is also known as Mercado de los ponchos, although you will find many more things than ponchos. Definitely, a lot of crafts made by the indigenous people of Otavalo.

It is slightly more expensive than La Mariscal in Quito or other markets of handicrafts that you can find in various cities of Ecuador. So that you have price references, you can find ponchos for $20, t-shirts for $8 or socks for $5.

13. Marvel at the Peguche Waterfall

Very close to Otavalo you can visit the Cascada de Peguche. Due to its proximity to Ibarra and Quito, it is one of the most visited waterfalls in Ecuador.

The waterfall is about 20 meters high and about 6 meters wide.. But do not settle for just the waterfall. To get to the waterfall you will walk a path through a eucalyptus forest. It is not very long, it will only take about 15 minutes and it is very easy.

In addition, the Cascada de Peguche is also an indigenous ceremonial center. Purification baths are held there to start the Inti Raymi and harvest festivities.

14. Buy embroidery and eat roast lamb in Zuleta, one of the best excursions to do in Ibarra

If you spend several days in the “White City” we recommend you escape to Zuleta. It is a small commune, quite remote, with a super interesting little market. It is famous nationally for the quality of its embroidery. Since the middle of the last century, the women of the community have made works of art with their embroidery. So if you are looking for something special to take home, you will find it there.

Also in Zuleta it is also very common to eat roast lamb. In most of its restaurants you can try this specialty. To lick your fingers!

15. Hallucinate with the wood carvings in San Antonio de Ibarra

And to finish this post about the best things to do in Ibarra, we couldn’t do it any other way than by paying homage to art. In San Antonio de Ibarra, a small town just 4 kilometers from the city, you can find a lot of artisans who do wonders with pieces of wood. Your carvings are amazing! In their galleries you can see how they carve from sculptures to furniture in wood. You will hallucinate!

SUMMARY OF THE BEST THINGS TO SEE IN IBARRA