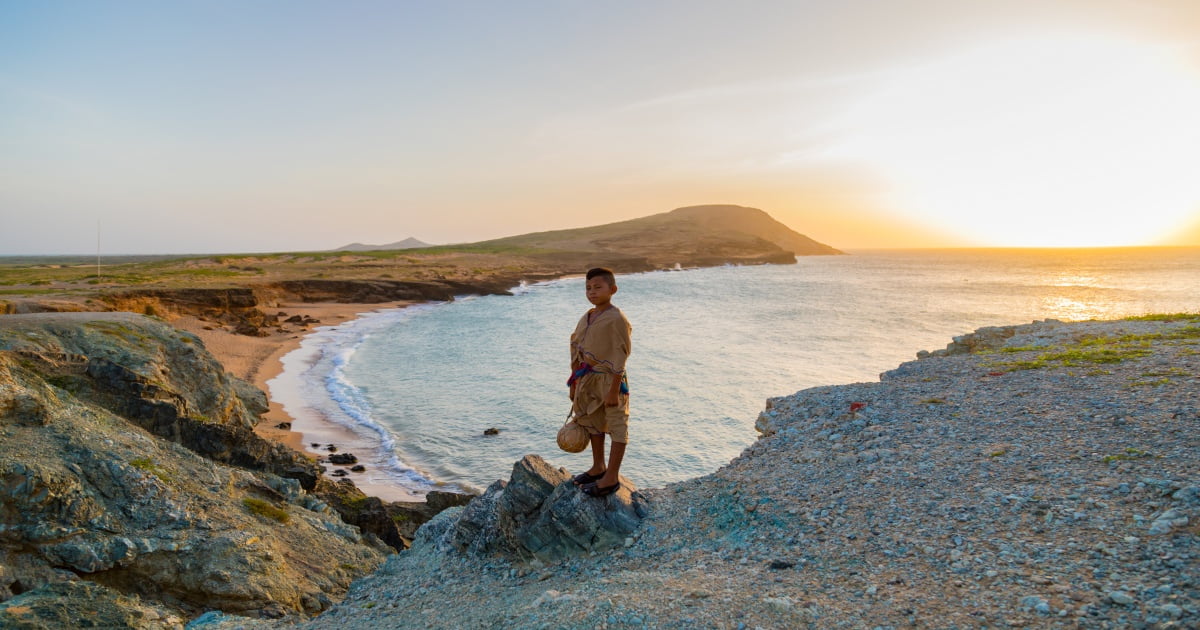 Bandita, at the end of 2021 I made a magical realism trip to Colombia for the first time. Here I leave you a chronicle of what it was like to know Bogotá, Santa Marta and La Guajira.

My great friend Cope Amezcua and I landed in golden Bogotá in the afternoon and headed straight to the hotel to check in and drop off our bags. We stayed one night in the stylish Embassy Suites Bogotá located in the beautiful Barrio Rosales -town of Chapinero- at the foot of the eastern hills of the city.

At night we went to see a famous place, very popular with locals and tourists; his name is Andres Carne de Res DC. It is a complete building, inspired by Dante Alighieri’s Divine Comedy so each floor -respectively- represents heaven, purgatory and hell, where we happened to be – what a succulent sin.

In addition to the baroque decoration, full of symbolism (the yellow butterflies clearly allude to García Márquez’s One Hundred Years of Solitude), artistic performances are held all the time. The food, by the way, is delicious and it was our first approach to Colombian gastronomy: My first arepas of life!

After a couple of drinks and beers (we tried Club Colombia and Poker), we went to the hotel to stay early because we were exhausted from the early morning and because the tour started early the next day.

We woke up very hungry, or as they say around here, “with a sharp edge that if I bend down I’ll cut myself” hahaha. So we went to a market that was already historic, but that Netflix and its street food special made it even more famous, and it is La Plaza Mercado de la Perseverancia.

Here we try several dishes from different regions of Colombia and continue our route to Plaza de la Concordia. From here we begin to walk through the streets of Barrio de la Candelaria -the vibrant center of the city- admiring the street art on many of its walls, by famous urban artists such as Guache, Dj Lu, Carlos Tilleras and others.

We also visited some squares and alleys -we tried the aphrodisiac big-ass ant- and we walked along its cobblestones -some very steep- only seeing from the outside the library, some museums, cultural centers, but above all the colonial mansions and from afar its infinite universities.

Our last stop was in the heart of Bogotá, the Plaza Bolívar where the powers of the state and of course the Church are concentrated. This “Zocalito” is sheltered by imposing buildings of different architectural styles, and by hundreds of pigeons waiting to be fed by tourists.

Our guide Daniel Vanegas It’s very cool, so look for it on your next visit.

At the end of the tour, we went back to the hotel to pick up our bags and headed to El Dorado airport to head to our next destination.

We woke up in a new city -Santa Marta- in the Department of Magdalena. Santa Marta is the oldest city in the country, and in the neighborhood where we stay you can appreciate the antiquity in the patina of the buildings, squares, streets and houses.

The hotel is called Hotel Boutique Don Pepe and it is a restored mansion where, by the way, the beginning of the video “La Bicicleta” by Carlos Vives and Shakira was recorded.

First thing in the morning you can see people on bicycles, the red (coffee) carts and “Minutes” for the cell phone. We had breakfast at the Alfaix Orange: arepitas, cayeye and of course their typical orange juice; and we moved to the Marítima to take a boat at the pier.

After a few minutes we entered -by sea- the Tayrona National Park, one of the most important in Colombia, and after 40 minutes of saeta on the waves we arrived at a beautiful bay to voluntarily shipwreck in Playa Cinto. 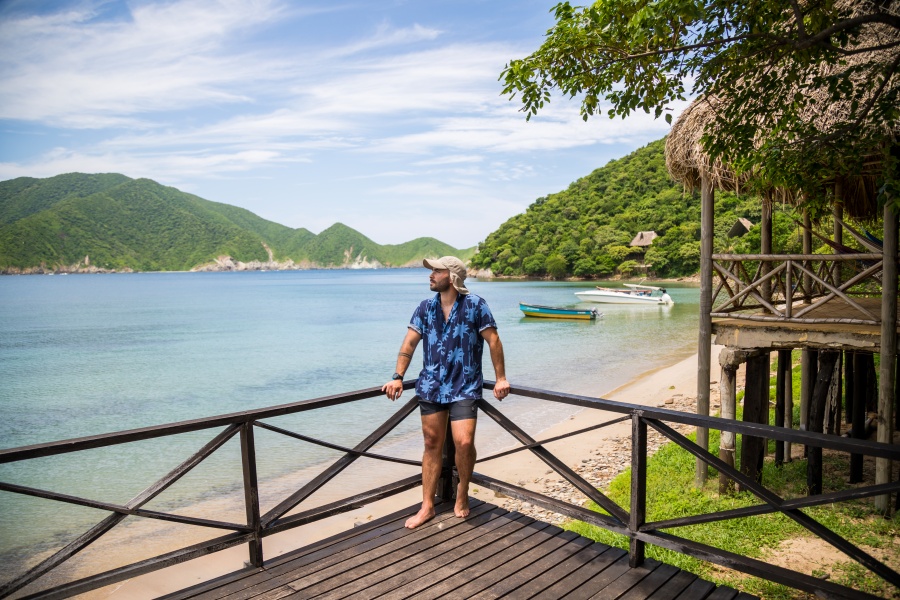 The tranquility of this place is absolute and contagious, so we voted on a terrace, to rock in some hammocks and to drink “polas” (beer) Águila, and other artisanal chelas.

Then it was time to eat the traditional coastal sancocho, some shrimp skewers and even lobster caught the day before.

Before leaving we went into the sea to snorkel; Due to the rains, the water was somewhat cloudy, but we were still able to admire its beautiful reefs. On the way back we observed a couple more beaches from the boat and a blushing gray sunset accompanied us back to the mainland.

With the night upon us we returned to the hotel and then we went to dinner at Guasimo Restaurant An unforgettable 6-course dinner with seafood, fish and the influence of La Guajira. Extraordinary! Already in the hotel, happiness -and fatigue- were the best sleeping pills.

We leave behind Santa Marta and the Department of Magdalena to go further east, at the end of the Andean mountain range and at the beginning of the Caribbean desert: La Guajira.

After several hours on the road we finally managed to reach the Montes de Oca Nature Reserve to do a bit of hiking; we walked on some cement and moldy tiles that covered a creek, and then we started walking uphill through the brush, along the side of the mountainous river until we reached some small waterfalls and pools of turquoise blue water. 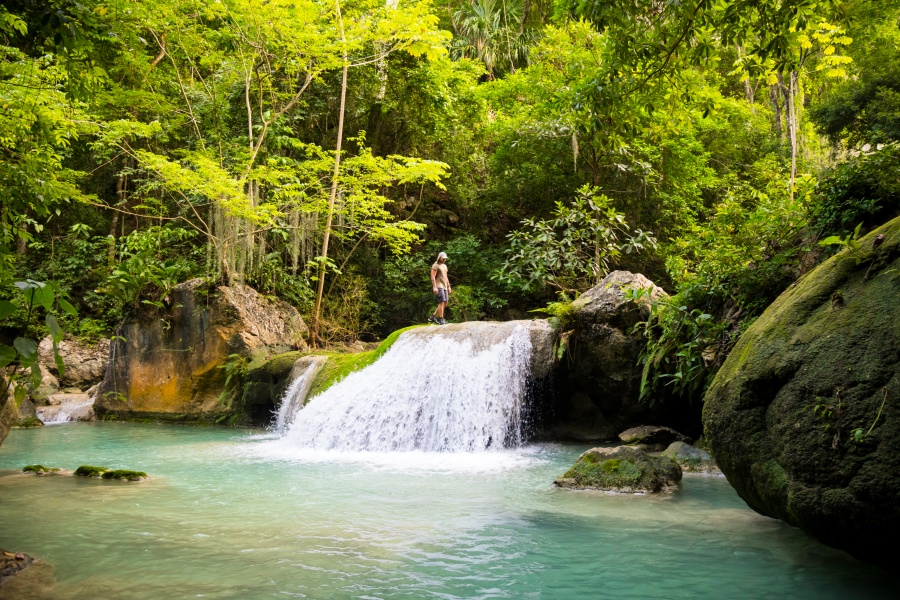 Here we took a dip sharing the natural pool with some local children who played jumping from the rocks.

Back in the car, and with dusk upon us, we went to a ranchería -La Horqueta- belonging to a Wayuu community (an indigenous ethnic group from La Guajira).

Through the women and children of this ranchería they showed us their music, their dances, their food and their traditional crafts. It was a unique experience where we were able to learn and connect with the original guardians of these lands. 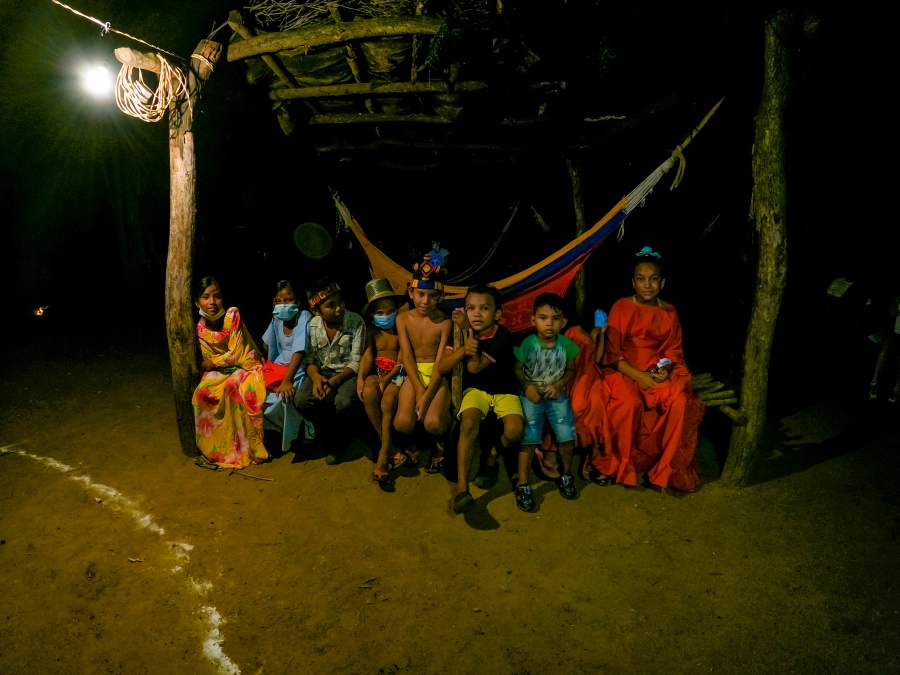 Finally we did not go to our hotel, near the town of Albania; it’s called Hotel Waya Guajira and at first glance it looked like a cool and comfortable place to spend the night. In the morning during breakfast I could already appreciate it well and yes, indeed, it is a great place to stay in the region.

We changed conventional trucks for 4 × 4 and began our journey north. The road gradually became more rugged until it became lines lost over the desert.

We began to see Wayuu huts among the shade trees and children running towards us like an oasis.

That is how we arrived at Jarrinapi in Cabo de la Vela; some nice cabins a few meters from the beach, where we would spend the night. The contrast of the water of blue tones – light and dark – with the desert reminds me of the Mexican Baja; It is without a doubt a mystical place full of natural beauty.

Our guides for the day were Élida and little Víctor, she is dedicated to community tourism and the boy to study in the morning and to the family ranchería in the afternoon.

With them we went to some of their sacred places – like an Ojo de Agua that predicts the rest of your life when submerged; the lighthouse from where you can see a panoramic view of the desert and the Caribbean Sea; a small beach and a cave, which is the passage between the first life and the second life within the Wayuu spirituality; and finally we went to Cerro Kamaichi (or Pilón de Azúcar) to watch the sunset.

Some stairs take you to an archipelago of rocks on the reddish sand, where you can sit and watch the sunset. It was short but beautiful and the best way to end the day.

During your visit to Cabo de la Vela look for Ipotshiru Cultural Rancheria and before going to party, take a cultural tour with them, to learn their traditions and their ancestral knowledge.

We bid farewell to the sun in Cabo de la Vela with a good morning and headed to our last destination.

Halfway down the road we stopped in Riohacha, the capital of La Guajira, to walk among the tall palm trees and see some of the handicrafts they sell on the coastal promenade.

Later we continued to another indigenous reservation Katanzama -this time Arhuaco- and we were about to take a tour of their community to learn more about their culture, their traditions and their precious cocoa. However, that day they had an important meeting, a spiritual ceremony that would last several hours and the Mamo (or Mamu) -the highest expression of wisdom- apologized but told us that it would be impossible to receive us.

It was thus that one of them spoke to us for a few minutes about his connection with the environment: “Nature does not belong to us; we belong to it” and therefore it must be respected and preserved.

Later we continued to an archaeological settlement -Taironaka- and ate a chicken and rib sancocho.

To end the day -and the trip- we boarded a boat that took us down the riverbank to its own mouth at Playa Palomino. The sunset marked the end of this story and we would have stayed longer but the wild mosquitoes were in charge of ending the ceremony with a bang -or rather a picket. 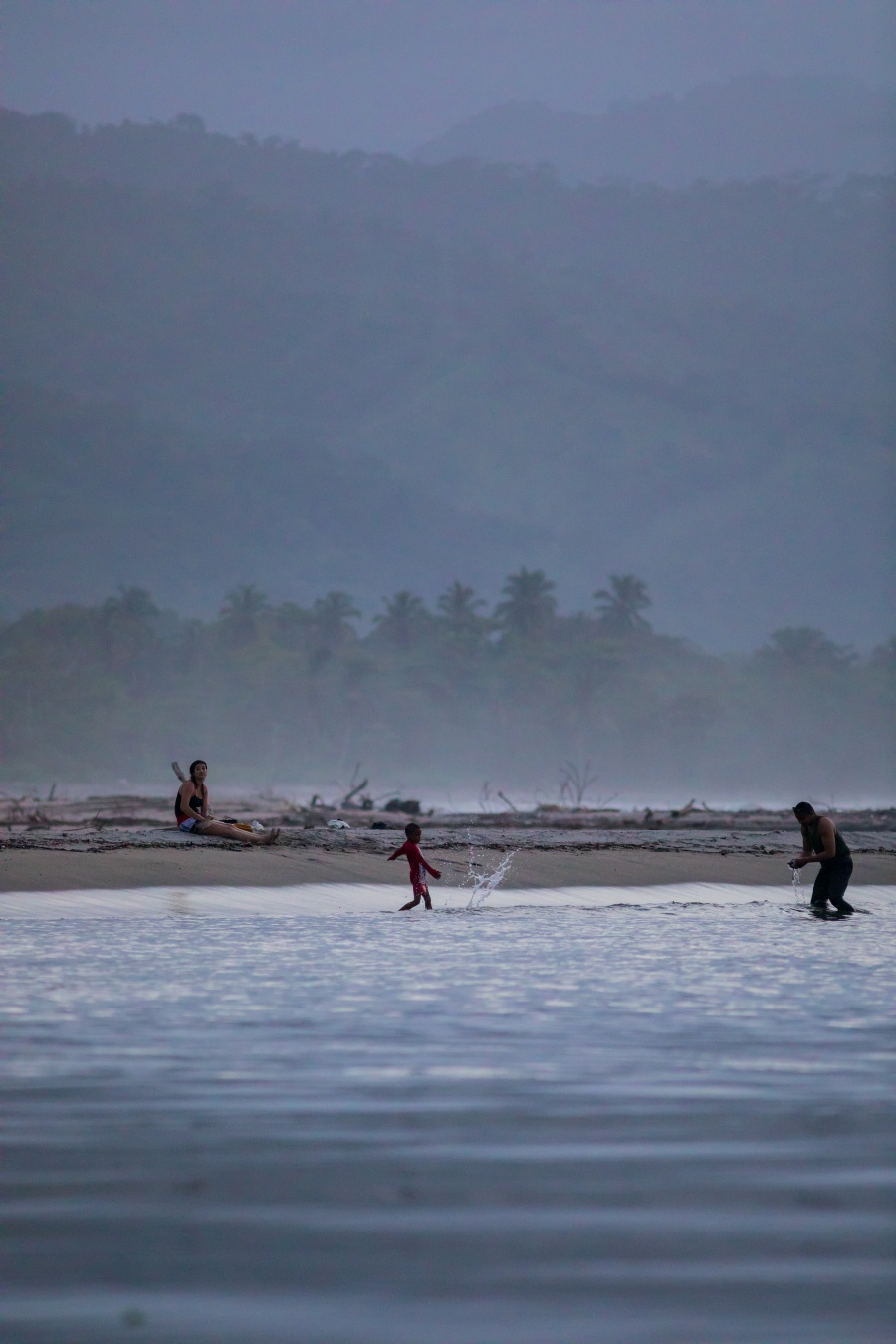 Coming back down the river, fortune winked at us, and we found some locals playing Tejo -the national sport- listening to rancheras and drinking beer. 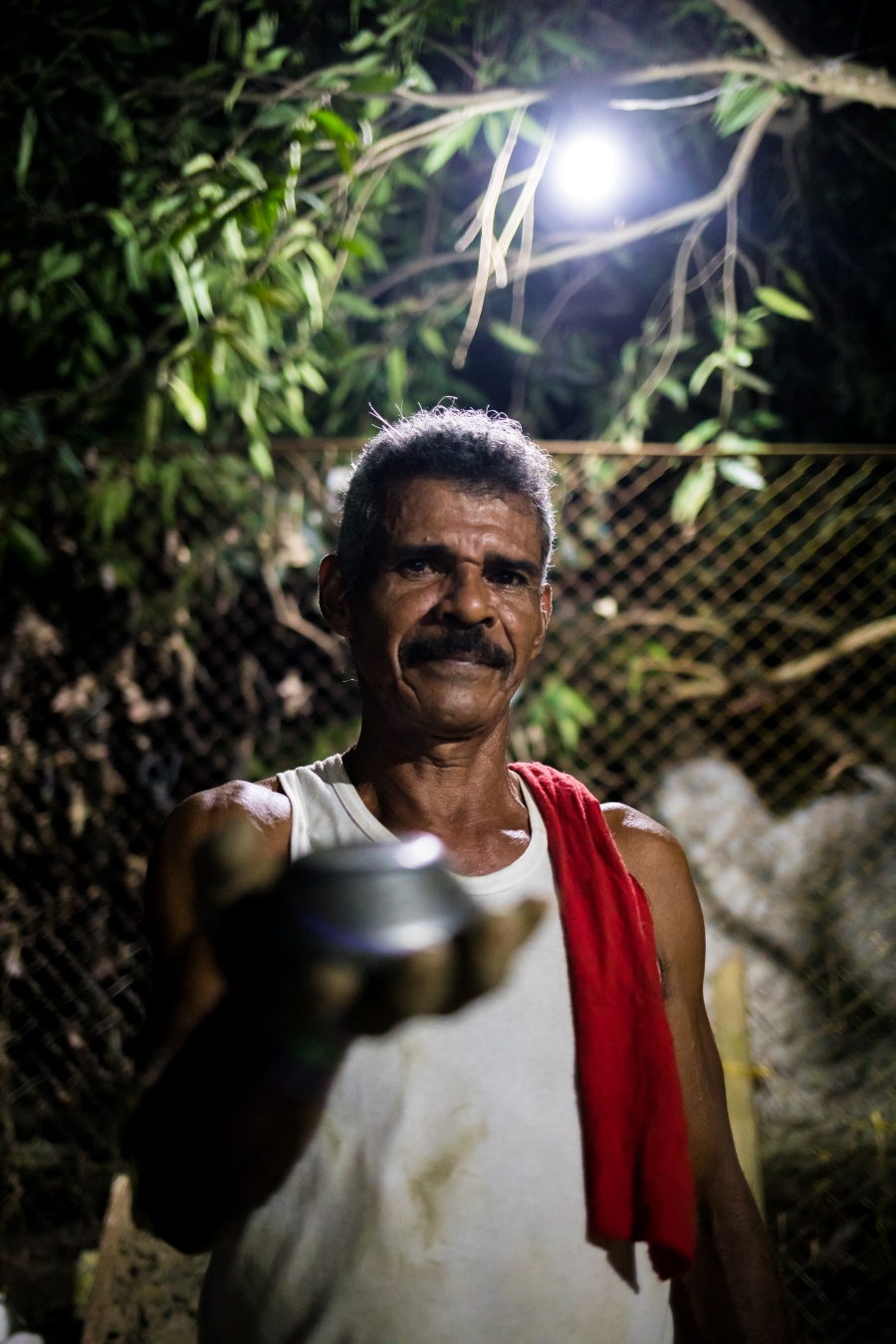 The next day we flew from Santa Marta to Bogotá, and then finally to Mexico City. As I write this I am having a Colombian “Kogi” coffee and I just want to say that the trip was so beautiful, between the warmth of its people, the spirituality of its indigenous people, the magic of its food, the history of its cities and the majesty of its his landscapes, which all seemed to have been written by Gabriel García Márquez.

For more information on destinations and tourism in Colombia visit: https://www.instagram.com/marcapaiscolombia/