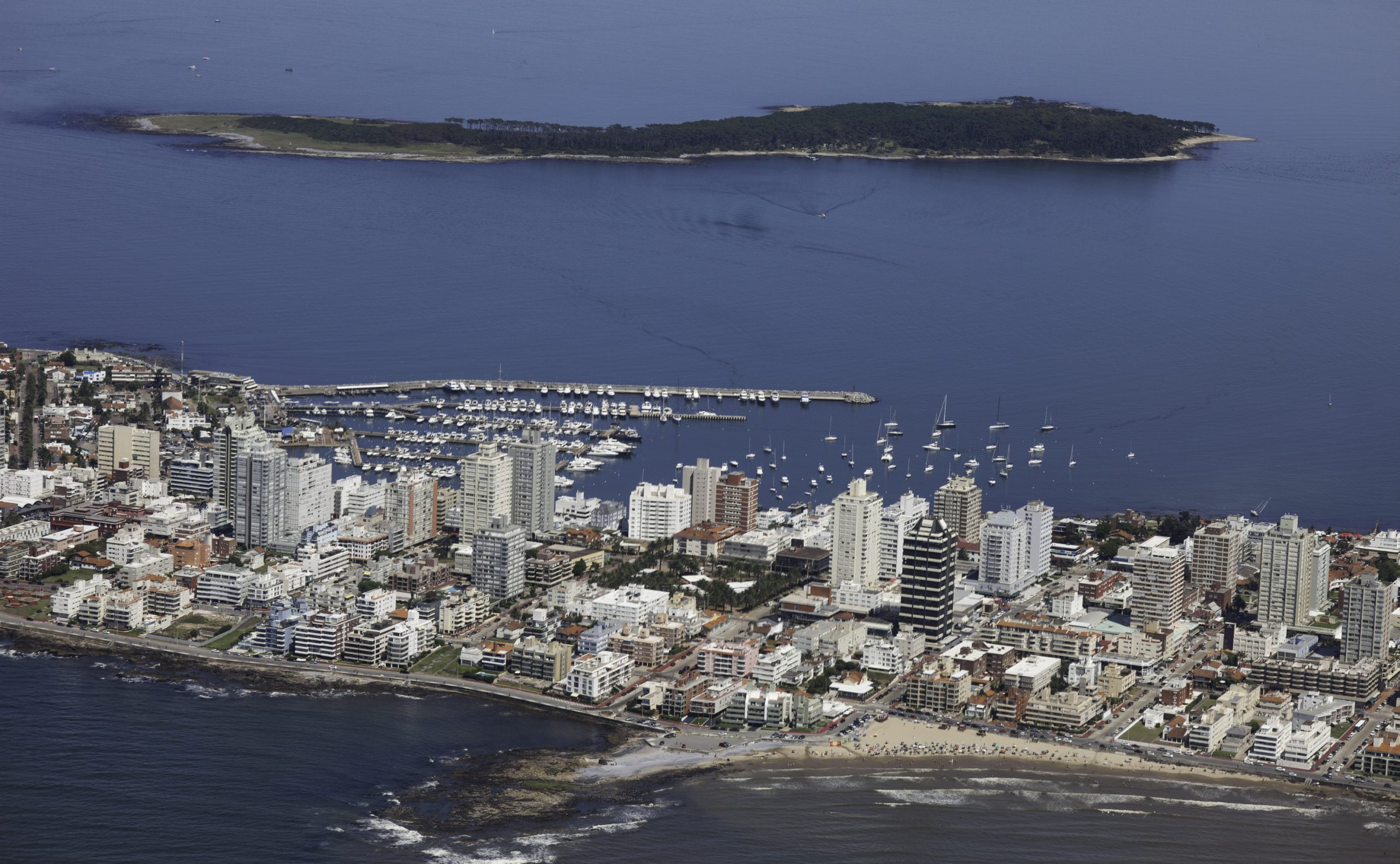 east end can be visited by various means of transport, whether land, sea or air. There are flights from Buenos Aires, Campinas, Porto Alegre, São Paulo, Belo Horizonte, Santiago de Chile and Asunción to Laguna del Sauce international airport, 21 km from the city. From some cities in South America it is also possible to reach Punta del Este by plane via Carrasco International Airport and from there by land. There is also El Jaguel International Airport, which includes private international flights directly to Punta del Este. Several companies offer daily shipping between Buenos Aires and Montevideo. From there you can take the bus to Punta del Este or continue on the road. Tourists who intend to arrive on land can do so by bus or with their own vehicle. There are regular direct and indirect connections from the Três Cruces Terminal in Montevideo, as well as from other large cities in neighboring countries or in the interior of Uruguay, which reach the peninsula especially in high season (December to March).

Punta del Este has an oceanic climate similar to Cfb with wetter winters than summer and relatively cold and dry summers than winter and hot summers with mild or warm days and cool nights. The fact that this climate occurs is due to its location in the extreme south of mainland Uruguay (35º south latitude), which facilitates the entry of polar fronts and strong winds that penetrate the continent associated with the cold Falkland Current, also known as the Falkland Current. , which makes the region colder than it should be at this altitude.

The city of Punta del Este is considered one of the most important and exclusive tourist destinations in South America and a meeting point for the South American jet set. Natural and sophisticated resort par excellence, it currently has a Rambla, magnificent typical thermal buildings, modern skyscrapers, a port with great infrastructure and landing capacity, commercial spaces for major brands, restaurants and bars. About 200 kilometers from the border with Brazil and 130 kilometers from the capital Montevideo, the city is known for being visited by artists, millionaires and members of high society from several countries, especially Brazil and Argentina, which attract more than 400,000 tourists. in the high summer season.

In addition to the beaches, the highlights of Punta del Este are: gastronomy with a large number and variety of restaurants where you can enjoy parrillada (Uruguayan barbecue, with meat and entrails grilled in a typical way), casinos (including the famous Casino Conrad and Casino Mantra) and famous brand stores. A traditional brand of Punta del Este are the stickers that are affixed to the cars of various establishments such as hotels, banks, stores and supermarkets. It has a great tourist attraction among young people and people of the social class, from the upper bourgeoisie to the upper bourgeoisie. The proximity, combined with economic and exchange opportunities, makes Punta del Este one of the most popular natural and tourist paradises in Brazil.

First, what you already know: Punta del Este is the most popular Uruguayan beach resort. In the summer it is visited by Argentines and recently also by Brazilians (except the gauchos who have been there for decades). Punta del Este gets crowded between Christmas and Carnival (with a break at Easter), but for the rest of the year it’s super relaxed, sought after by those who want to relax (or play in the casinos). The name means “East Point” and describes the exact location of the place: eastern Uruguay. The tip of the peninsula marks the separation between the Atlantic Ocean (open sea) and the Rio de la Plata (bay).

Contrary to popular belief, Punta del Este is not only visited by wealthy people, with a very eclectic tourist audience. Most of the population consists of solid middle-class families during the season, who take summer vacations in their own or rented houses, do their shopping at the supermarket and take ice to the beach. But its reputation as a magnet for the rich, famous and millionaires in general is not unsuitable. Just walk past the new buildings on the edge of Playa Brava or stroll through the streets of Beverly Hills to notice.

Another important audience in the season that helps to shape the personality of Punta del Este are the young partygoers. Punta del Este in summer is a party that starts at sunset on the beach and lasts until the early hours of the morning. The water is cold and dark (the bluest side is Mansa beach, in the bay of Rio de la Plata). The most positive points are cleanliness, organization (some have very charming kiosks) and the relatively dry summer, with the sun until late (it is not uncommon to go to the beach at five and stay until nine in the afternoon).

In summer, a few days in Punta del Este is an excellent program. The city is at its peak, with restaurants running and beaches at their peak. Off-season accommodation is recommended for those who find it tiring to drive from Montevideo on the same day or who still want to enjoy the night at the casino.

Monument to the Drowned (La Mano or Los Dedos)

Better known as Los Dedos or La Mano, the Monument to the Drowned is one of the city’s main postcards. It was created in 1982 by the Chilean artist Mario Irarrázabal in a competition held this year in the Uruguayan city and is made of plastic, iron and steel. Anyone who goes to Punta del Este should visit this sculpture and take a picture next to the giant fingers that stick out of the sand of Playa Brava.

A good option is to visit some of the museums in Punta del Este. Among the most famous museums are the Ralli Museum, the Museo Paseo de Neruda and the Museum of the Sea. The Ralli Museum is located in the upscale Beverly Hills district and has free admission. It shows works by various artists, recognized or not, from Latin America, including the famous painter Salvador Dalí. Sculptures can be found throughout the museum, even in its garden. The Paseo de Neruda Museum is a museum in the house where the Chilean poet Pablo Neruda lived for some time with his wife. Here you will find the artist’s personal effects and you will enjoy temporary exhibitions and incredible shows. Another interesting museum is the Museum of the Sea in the La Barra region, just a 15-minute drive from Punta del Este. It is located in a natural environment and is divided into 4 rooms, including the Hall of Marine Mammals and the Hall of Pirates, and it is also made up of several areas, such as the Museum of Memories, the Museum of Spas and the Insectarium. You will see very different marine species, it’s worth it! Discover the values ​​and dates of guided tours and/or exhibitions on the official website of each museum to plan your trip.

Also known as Plazoleta Great Britain, Plaza de los Ingleses (Plaza dos Ingleses) is the place where the border between the Rio de la Plata and the Atlantic Ocean is located, at the southernmost point of Uruguay. The name originates from the Battle of Rio de la Plata, which took place in 1939 and which had a German ship and British cruisers among its participants. It is a pleasant and beautiful tourist spot, providing a beautiful sunset in the city.

Punta del Este has several excellent beaches to enjoy the summer. The most famous are Playa Mansa and Playa Brava, which border the city. Playa Mansa has fresh water because it is washed by the Plate River and, as its name suggests, has a calm sea. Playa Brava, with its salt water, is bathed by the Atlantic Ocean and has a sea with more waves. Another great coastal region is La Barra, 10 km from downtown Punta del Este. Here you can enjoy Playa Bikini, where there are several activities and many DJ parties, and Playa Montoya, the liveliest beach in the city, where you can watch sports championships such as surfing. Don’t miss Playa de los Ingleses. It is very rocky, not suitable for swimming, but it is good to visit, enjoy the scenery and take lots of pictures. It must be remembered that the water on the beaches of Punta del Este is colder, so the best time to stay in these regions is in the summer, to find a pleasant temperature.

Punta del Este has incredible attractions for you to enjoy the bustling nightlife of the city. You can visit a fun club or bar, dine in a restaurant with a varied and delicious menu or gamble at the Casino Conrad Hotel, which also offers tango courses, concerts and exclusive parties. Nightlife in Punta del Este starts late, so it’s common to see people eating around 10pm and then enjoying the nightlife until dawn. One of the most popular clubs in town is the Moby Dick Pub in the Playa Mansa area, which offers live music and a DJ after 2:00 am.