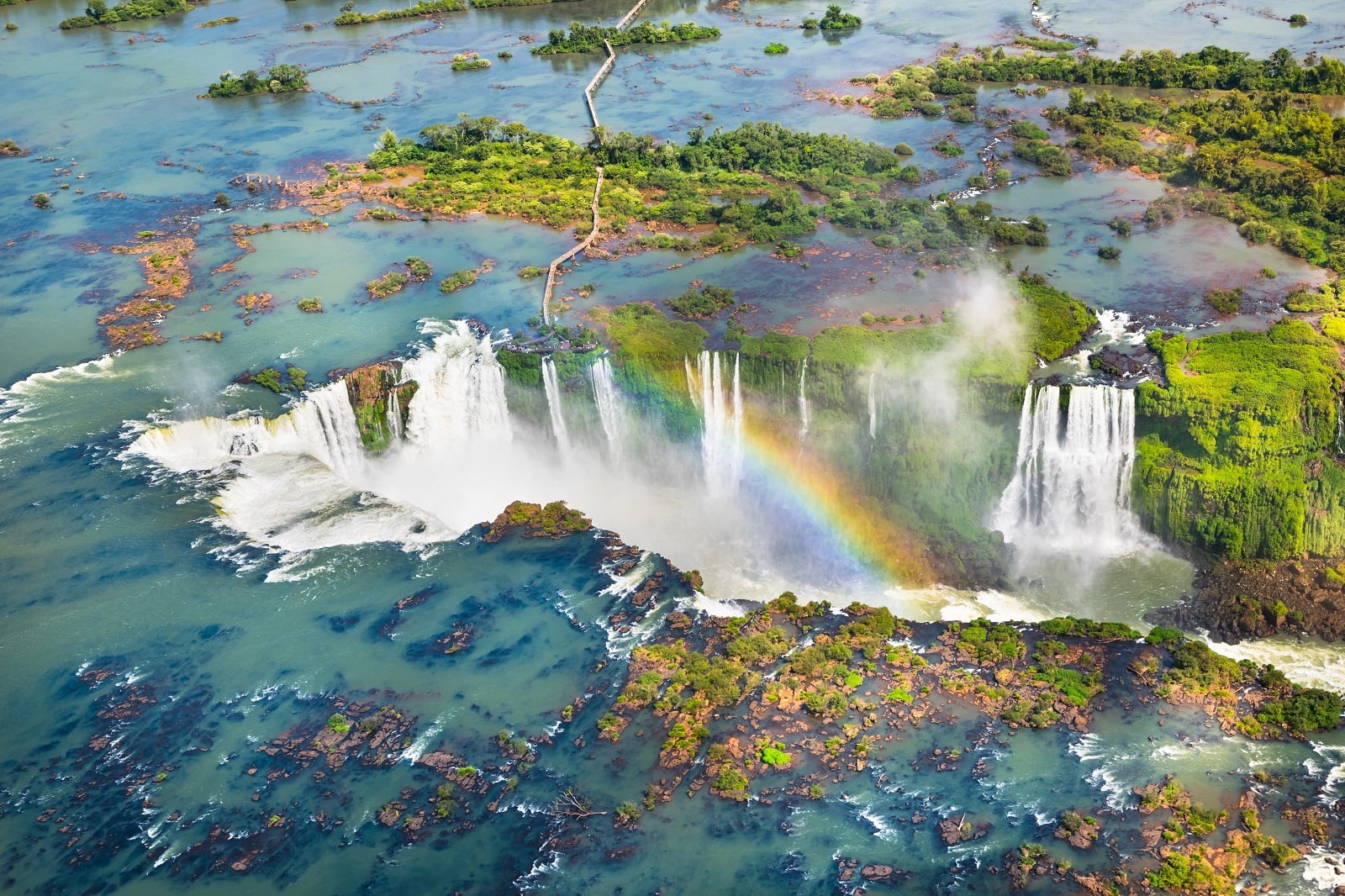 Foz do Iguaçu is a Brazilian municipality located in the Brazilian state of Paraná. According to IBGE estimates, in 2019 the population of the municipality was 258,532 people. The distance from the state capital is 643 kilometers and the land area is 617,701 square kilometers, of which 61,200 square kilometers are in the suburbs. It is one of the main destinations for foreign tourists in Brazil and the first in the southern region.

Foz do Iguaçu is internationally known for the Iguaçu Falls, one of the winners of the competition that selected the 7 wonders of nature, and the Itaipu hydroelectric plant, the second largest in the world in size and first generation of energy, which in 1996 was considered by the American Society of Civil Engineers as one of the 7 wonders of the modern world.

The city is part of an urban region with more than 700,000 inhabitants, including Ciudad del Este in Paraguay and Puerto Iguazú in Argentina, which borders the city. Iguaçu is an indigenous toponym and originally can be divided into Y (water) and Guazú (large), which contain the current name by adding a vowel.

Foz do Iguaçu is located at the western end of the third plateau of Paraná, the westernmost municipality of Paraná. The relief is slightly mountainous, which greatly contributes to the development of agriculture. Its height varies in two hundred meters. To the west of the city runs the Paraná River, to the south the Iguaçu River, to the north the Itaipu Lake and to the southeast the Iguaçu National Park, one of the last intact nature reserves in Paraná. To the southwest of Foz, the Iguaçu and Paraná rivers join to form the triple border between Brazil, Argentina and Paraguay.

Foz do Iguaçu is considered one of the most multicultural cities in Brazil, with more than 72 ethnic groups from different parts of the world, the most important being Italians, Germans, Hispanics (Argentines and Paraguayans), Chinese, Ukrainians and Japanese. The second largest Lebanese community in Brazil is represented. In proportion, it has the largest Islamic community in Brazil.

Due to its location on the border with Paraguay and Argentina, Foz do Iguaçu has a high prevalence of contraband, drugs and weapons, which causes several social problems, especially violence, which makes the homicide rate very high in relation to the population. The municipality leads the ranking of murders among young people in the country.

The main sources of income in Foz do Iguaçu are tourism, which also promotes trade and the provision of services in the region, and the production of electricity. It is the second destination for foreign tourists in the country and the first in the southern region. Foz do Iguaçu is internationally known for its tourist attractions that attract visitors from Brazil and around the world. The most famous are the so-called Iguaçu Falls in the Iguaçu National Park and the Itaipu Hydroelectric Power Plant (the largest hydroelectric plant in the world for annual energy production).

In addition to the traditional attractions of the city, another attraction for tourists is the possibility of buying products at reduced prices in neighboring Ciudad del Este. Throughout the year there is a large flow of Sacoleiros (known as people who buy a lot in Paraguay to resell in Brazil) who only cross the Ponte da Amizade to buy, as they usually spend the night in Foz. Another attraction of the neighboring towns is the opportunity to learn about the Argentinian side of the falls; nearby you can also visit casinos, activities not allowed in Brazil.

The main attractions of the city are the so-called Iguaçu Falls in the Iguaçu National Park (UNESCO World Natural Heritage), the binational hydroelectric plant of Itaipu (the largest annual plant in the world), symbol of the Three Borders, the estuary of the Iguaçu River in Paraná River (territory, where the borders of Argentina, Brazil and Paraguay meet), the Ponte da Amizade Internacional (border between Brazil and Paraguay) and the Ponte da Irmandade (border between Brazil and Argentina), the Parque das Aves (with about of 900 birds of 150 species), among others. Foz do Iguaçu has one of the largest hotel parks in Brazil, close to the international airport of Cataratas, served by the main national and international airlines. In addition to the popular tourist attractions, there is a wide range of restaurants, barbeques, bars and nightclubs, as well as two shopping malls. Access to the street is via BR-277, which ends at Ponte da Amizade.

Tips of things to do in Foz do Iguaçu

When we talk about tourist tips in Foz do Iguaçu, we have to talk about the Iguaçu Falls and their natural beauties. The waterfalls can be visited from the Brazilian and Argentinean sides, each with its own itinerary, experiences and different perspectives. But no matter which side you choose, you will be immersed in an environmental protection experience.

How about enjoying the immensity of the waterfalls and enjoying a slower tourism (which requires more time)? Walk at your own pace, enjoy every minute and appreciate the falls more with your eyes than your camera lens.

Foz do Iguaçu is widely known for its great heat that lasts throughout the year, so imagine going to the city and being able to have fun “freezing” in an ice bar? It is true, in recent years, ice bars have become a reality in Foz do Iguaçu.

With different formats, the ice bars in Foz do Iguaçu are attractive and offer an experience that pleases both tourists and residents. And according to the knowledge of recent years, these are tours that will consolidate and deserve to be done.

Did you know that in Foz do Iguaçu there is a “beach”, even though the municipality is about 600 km from the coast? At the end of 2018, the first phase of Blue Park was inaugurated, a new water park with a thermal beach with different types of waves, real sand and a special facility for the entertainment of tourists and visitors to Foz do Iguaçu.

Ciudad del Este, in Paraguay, is a key destination for anyone looking to shop in the region, and in recent years the main stores have been modernized to meet the new reality of shopping tourism. These stores have been renovated into megastores with a wide variety of products, safe to buy and excellent service.

Dollar price fluctuations are an issue to consider when planning a shopping trip in Paraguay. However, in many cases it is still advantageous to buy products in Paraguay, especially electronic products, which cost almost half the price in Brazil.

Marco das Três Fronteiras in Foz do Iguaçu has been configuring itself as a different tourist place, a cultural and social space, with attractions for walking and other entertainment spaces. Today it is a tourist attraction that transmits security and modernity to visitors and tourists who visit it.

One of the most popular tours for tourists traveling to Foz do Iguaçu is the Macuco Safari. The tour is located in the Iguaçu National Park and takes visitors on an adventure under the waterfalls of the Iguaçu Falls. After an electric car ride through the center of the national park, the boat ride is the culmination of the adventure along the Iguaçu River, where bathing in the waterfalls is the highlight of the tour.

For adventurers there is also the possibility of doing the Macuco Safari + Rafting, in this option we first do the traditional Macuco Safari Tour and then we go down to the Pier Rafting where we train a little, and after using the safety equipment we go down the Iguaçu rapids in a rubber boat, naturally accompanied by a team of professionals.

Minions get into the spirit of cruising with a Despicable Carnival...