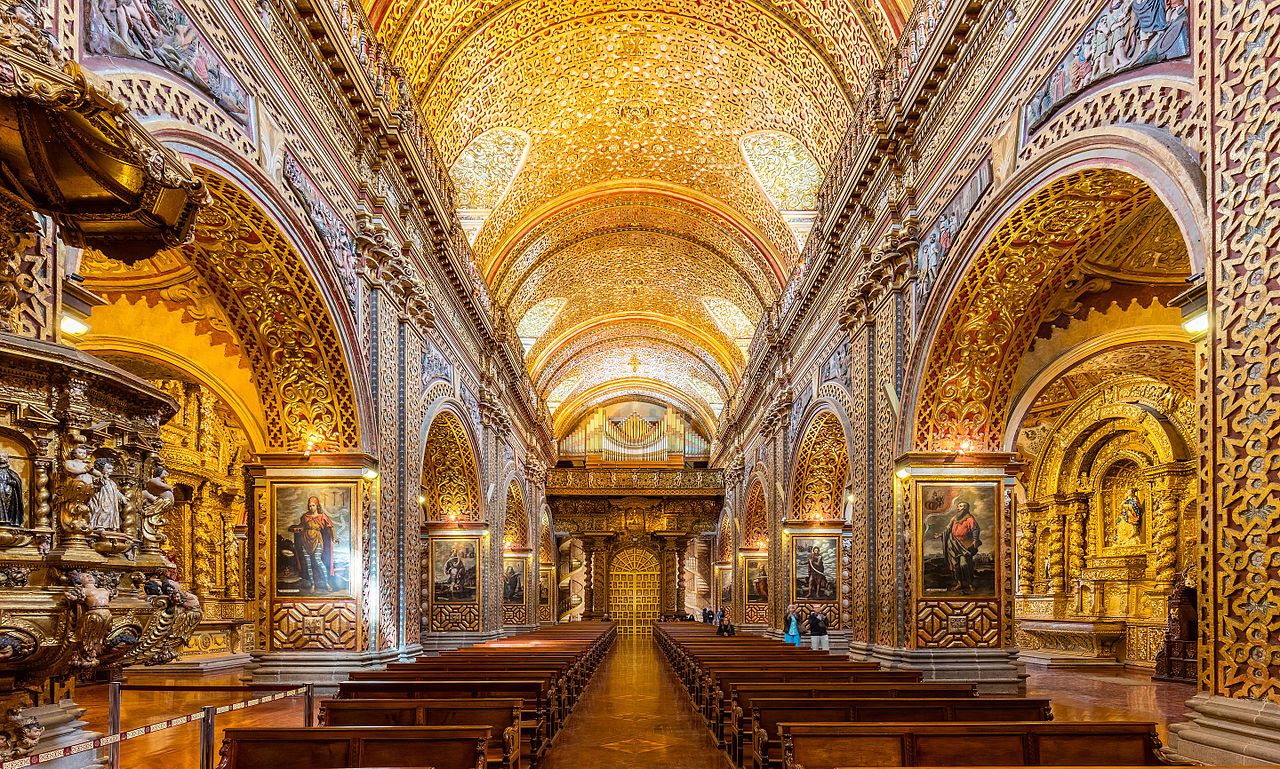 There are many churches in Quito. In fact, it is one of the cities with the highest concentration of ancient churches in Latin America. Especially in its historic center, the largest and least altered on the continent. A real gem! So on your visit to the capital of Ecuador, you cannot miss the route through the churches. Here we tell you what are the best churches in Quito so you don’t miss them.

25 things to do in Quito

On this map you will find the location of the best churches in Quito.

10 BEST CHURCHES IN QUITO: THE MOST BEAUTIFUL!

1. Church of San Francisco, our favorite

It is the oldest church in Quito. And also one of the most beautiful! In our opinion, if we take into account its history, and both its interior and exterior beauty, we believe that it is the best church in Quito. It is a complex, which has a church and a monastery, located in the heart of the historic center of Quito.

The Church of San Francisco began to be built in 1534, but it did not end until 150 years later. All this resulted in a very interesting mixture of architectural styles, which still add more value to the temple. But that’s not all! Inside you can enjoy more than 3,500 works of colonial art. What we liked the most was its beautiful golden altar, which contrasts very well with the blue domes.

The history of the church has not been easy. The structure has undergone several changes since the mid-eighteenth century, especially due to the various earthquakes that occurred in the country. Definitely, one of the best churches in Quito.

The entrance to the Church of San Francisco de Quito is free.

For many, the Church of La Compañía is the most beautiful in Ecuador. Although there is a lot of competition! Not only in Quito, but in Cuenca. The New Cathedral of Cuenca is also amazing. But returning to the Iglesia de La Compañía, it is a real gem. From the outside it does not seem very striking, until you know that the facade is built in volcanic stone. Curious, right? But when you enter, it seems that you have moved to an idyllic place.

Its interior covered with gold leaf is a true marvel. It was built somewhat later than the Church of San Francisco. Construction began in 1605 in the Spanish Baroque stylealthough it also ended up incorporating French and Italian baroque elements, and even Moorish influence, before being completed in 1765. The Iglesia de La Compañía is one of the best churches in Quito and also one of the best representations of the baroque in the world.

Admission to the Church of La Compañía costs $4, although it is free on the first Sunday of each month. Inside you can not take photos.

3. Basilica of the National Vote, one of the best churches in Quito

It is surprising that the largest neo-gothic cathedral in South America is at number 3 on this list of the best churches in Quito. But this way you can imagine the level of religious buildings in the city! It is, by far, the largest church in Quito. If you have been to Bourges (France), you will see that the temple is inspired by the cathedral of the French city.

25 essential places to see in France

The interior is not as spectacular as that of the earlier churches. Although the stained glass windows are spectacular! In this case, you can also climb the towers and enjoy one of the best views of the city. Both towers rise up to 115 meters high and for many years it was forbidden to build buildings taller than the Basilica of the National Vote. As a curiosity, This temple is also the tallest in Latin America. So get ready to climb stairs!

The entrance to the church and the towers of the Basilica of the National Vow costs $1 for Ecuadorians and $2 for foreigners. It is very worth it!

4. Metropolitan Cathedral of Quito, the most important temple in Ecuador

If we talk about importance, there is no doubt that the Metropolitan Cathedral of Quito is not only the most important religious temple in the city, but the whole country! In 1995 it was elevated to the Primate Cathedral of Ecuador, for which it became the highest-ranking Catholic temple of the Catholic Church in Ecuador.

As well It is the seat of the Archdiocese of Quito. Its location is perfect, located in front of the Plaza Grande. It was one of the first Catholic temples in Quito. Construction began between 1562 and 1565, although his appearance was very different from now. It was built of adobe, wood and a thatched roof! However, that gives it the award of being, probably, the oldest cathedral in South America.

Inside the church you can appreciate the art of the Quito School, a style of religious art that mixes Spanish and European techniques with the indigenous art of the country. Definitely, one of the best churches in Quito.

The entrance to the Metropolitan Cathedral of Quito costs $2 for Ecuadorians and $4 for foreigners. However, We recommend doing the tour of the domes to enjoy the views. In this case, it costs $4 for nationals and $6 for foreigners.

5. Church of El Sagrario, one of the best churches in Quito

This church adjoining the Cathedral of Quito is one of the best in the city. It is part of the Cathedral complex, although we believe it is better to analyze it separately due to its artistic importance. The main attraction of the Church of El Sagrario is its decoration.

The local artist Bernardo de Legarda, one of the most important figures of the Quito School of Art, did real wonders inside. The main altar of the church is beautiful! The temple features a wide variety of architectural styles, including Baroque, Moorish, and Neoclassical.

The entrance to the Iglesia del Sagrario is free.

In the picturesque Plaza de Santo Domingo you can visit the Church of Santo Domingo, one of the most famous in the historic center of Quito. Like the Church and Monastery of San Francisco, it also began to be built in the 16th century, being one of the oldest in the city and in the country.

During the 19th century, a group of Italian Dominicans carried out important reforms inside the church. That is why it retains an elegant Renaissance neo-Gothic style that can be seen in the canopy of the main altar.

Entrance to the Church of Santo Domingo is free.

7. Iglesia de San Agustín, one of the best churches in Quito

In the historic center of Quito you can find this church, dedicated to the Catholic saint and philosopher, San Agustín. Inside, it is very interesting to look at its walls, as they tell the life of the saint through a series of paintings. It was built from 1606 by the Spanish architect Juan del Corral, making it one of the most colorful and cheerful churches in Quito.

Admission to the Church of San Agustín is free.

8. Basilica of Our Lady of Mercy

This basilica was founded by priests of the La Merced order in the 16th century. Unfortunately, the original temple did not last for many years as it was destroyed in an earthquake in 1660 before reconstruction began in 1701. It is a monument of Baroque and Moorish style. It measures 47 meters and is one of the tallest churches in the Historic Center

Some of its most interesting aspects include pagan motifs, such as the stone pillars at the entrance with images of the sun and the moon, and a fountain with a statue of the Roman god Neptune.

In addition, inside it houses one of the most important historical libraries in the cityboth for its content and for its state of conservation.

Entrance to the Basilica de la Merced is free.

Itinerary to visit Quito in one day

9. Church of El Carmen Alto, a jewel in the heart of Quito

This Carmelite convent and church was built in 1653. There is the burial place of Santa Mariana de Jesús, the first Ecuadorian to be canonized by the Catholic Church.. Its interior is very interesting and full of artistic treasures, especially by Diego de Robles and Bernardo de Legardo. You can enjoy various works such as carvings, sculptures and paintings.

It is a very authentic place. Nuns live in the convent and sell traditional sweets and other products to tourists who come to see this curious temple. Since 2013, the two oldest cloisters of the convent were opened, including the original house of Mariana de Jesúswhich works as a museum.

Where to stay in Quito: best areas and hotels

10. Church of Santa Teresita, the mini Basilica of the National Vow

And finally, to finish this post about the best churches in Quitowe did not want to forget to mention the Church of Santa Teresita. It is a few meters from the historic center and, if you have several days in Quito, it is worth visiting.

Its style reminds us of the Basilica of the National Vote. Although she is much smaller! It is a neo-Gothic church from the 20th century, which attracts a lot of attention due to the area where it is located, mainly commercial. In this case, its towers measure 50 meters, for the 115 meters of those of the Basilica.

As a curiosity, the Church of Santa Teresita had a Spanish cathedral as its main source of inspiration. The majestic Cathedral of Burgos!

The entrance to the Church of Santa Teresita is free.

SUMMARY OF THE BEST CHURCHES IN QUITO