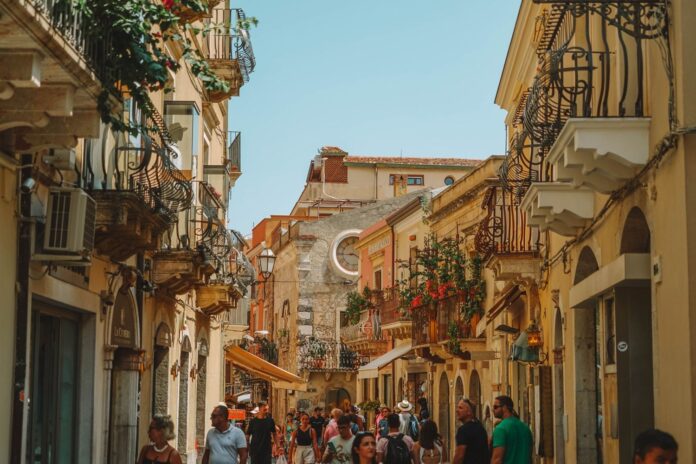 Going from Catania to Taormina is one of the most common routes for tourists visiting the east coast of Sicily. Catania is the second largest city on the island, only behind Palermoand Taormina one of the main tourist destinations to see in Sicily. It is tiny, but with a lot of attractions such as the historic Teatro Greco. Although his magic is in the streets! In this post we tell you how to go from Catania to Taormina so you can enjoy one of the most beautiful destinations in Sicily.

15 things to see and do in Taormina

HOW TO GO FROM CATANIA TO TAORMINA

1. Hiring an organized excursion, the most comfortable way

If you decide not to rent a car and you are looking for comfort, hiring an organized excursion may be the most comfortable option to go from Catania to Taormina. In addition, as Taormina is a small city that is usually seen quickly, it is easy to combine it with other destinations in its surroundings. So you can kill two birds with one stone!

You cannot miss its incredible Greek theater, its Mediterranean atmosphere or the spectacular views of Mount Etna and the sea. Taormina is amazing!

There are a lot of excursions in Spanish, You only have to choose the complement to Taormina that interests you the most.

Best excursions in Spanish to go from Catania to Taormina:

2. How to go from Catania to Taormina by bus, the fastest way

But if you simply want to go from Catania to Taormina by public transport, the bus is the most comfortable and fastest way. In fact, due to the orography of Sicily, for almost any trip it is much better to choose the bus than the train, since the latter does not reach all areas of the island and is usually more expensive.

Going from Catania to Taormina by bus is suck. You just have to go to the main bus station, located in Via Liberta, right next to the Catania Centrale railway station. It is a somewhat ugly and dirty area, but the buses leave from a parking lot that is a bit isolated. Fortunately!

However, we believe that the bus is the best way to go from Catania to Taormina due to the location of the stop in Taormina. Unlike the train, the bus will drop you off just a few minutes’ walk from Corso Umberto, Taormina’s main street.

There are two companies that operate the service from Catania to Taormina: Interbus and Etna Trasporti. That makes there are frequencies every 15 minutes (in high season) and between 30 minutes and one hour (in low season).

The drivers and staff will tell you that you can’t buy tickets on the bus itself, but actually you can (in case you’re in a hurry). Nevertheless, To buy the tickets, it is best to go a few minutes before to the office where they are sold, since it is just a minute’s walk from the station.

Tickets cost €5.50 per person per journey y The approximate duration of the journey is 1 hour and 10 minutes.

If you want to save, it is better that you buy the round trip at the same time, since then it will cost you €4.50 per person and way. However, they go with a fixed schedule and cannot be changed. So if you don’t know very well what time you’re going to return, it’s better that you just buy the one way in Catania and then the return at the Taormina station before returning. Definitely, the best way to go from Catania to Taormina.

Check the timetables to go from Catania to Taormina

3. How to get to Taormina from Catania airport

However, if you do not want to set foot in Catania under any circumstances, also there is an option to get from Catania airport to Taormina by bus.

In this case, they are also operated by the same companies, although the frequency is somewhat less, since a bus leaves approximately every hour. As Catania airport is quite close to the city, the journey time is just 15 minutes longer than from the city center.

The price of the ticket to go from Catania airport to Taormina is €6.50 per person and way.

You can buy tickets at the office just before getting on the bus. You just have to go to the ground transportation area, right next to the arrivals area.

Check the timetables to go from Catania airport to Taormina

4. The train, an impractical option

Going from Catania to Taormina by train is not the most practical option.a. And not because the trains are bad, but because in Taormina there is no train station. When you get to the city and see its location you will understand why! The station is located in Taormina-Giardini, in the lower part, 2 kilometers from Taormina.

From there you will have to take the public Interbus to the bus terminal in Via Luigi Pirandello. The journey takes about 15 minutes and costs €1.90 per person. There is a frequency of 2-3 buses per hour and tickets can be bought from the driver on the bus. However, it is somewhat inconvenient to have to take a train and then take a bus.

Another option is to connect the Taormina-Giardini station with the city by taxi. The price of the journey is approximately €15. You can also get there on foot, however it is an almost suicidal option because everything is uphill and along a narrow road. And in the summer months it is terrible!

There are two types of trains to go from Catania to Taormina: the regional, which has more frequencies, and the Intercity. The first costs €4.70 and the second €8.50, since it is faster.

5. By rental car, a fairly common option to go from Catania to Taormina if you want to make a route through Sicily

And finally, to finish this post about the Best options to go from Catania to TaorminaWe had to mention the car rental. If you only want to go from Catania to Taormina we do not recommend renting a vehicle. However, if your goal is to do a complete route through Sicily, it is well worth it because you will be able to reach all points on the island and it will give you a lot of freedom.

The journey lasts just 45 minutes and almost 30 minutes you will drive on the highway. You will have to pay a toll of €1.70 and the cost of fuel is around €5 for a small vehicle. Without taking into account the price of the car rental, it does not work out. In addition, you will have to add what the parking costs you.