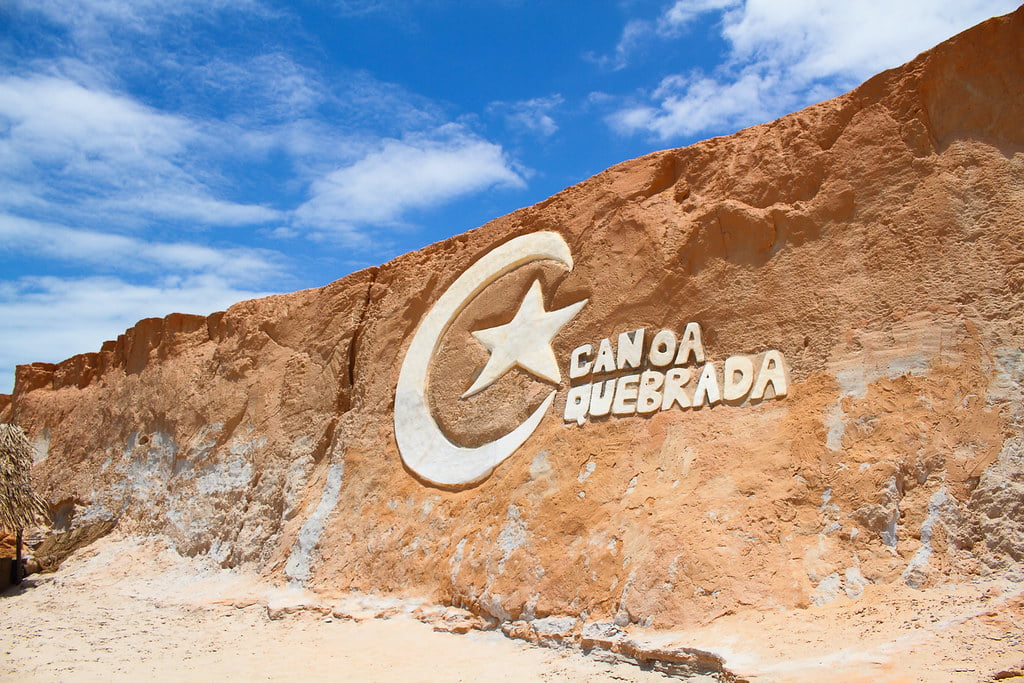 broken Canoe is a beach on the east coast of the state of Ceará, 163 km from Fortaleza and 12 km from the seat of the municipality of Aracati, belonging to the latter. The landscape is characterized by red dunes and cliffs up to thirty meters above sea level.

broken Canoe was born in the small fishing village of Vila do Estevão. Discovered in the 1960s by French filmmakers of the “Nouvelle Vague” movement, the village underwent a clash of cultures that led to a feeling of freedom that still prevails today. The local tradition is that the French worked hard during the day and played at night.

For this reason, a moon and star carved into the cliff became the symbol of the place. Another version of this local tradition tells us that on the film crew there was a Moroccan of Islamic faith who wanted Allah’s forgiveness with repentance for the continuous night out. To rid himself of his guilt, he had the moon and star modeled on the cliffs, now local symbols.

The village became famous when it was discovered in the 70s by the “hippies”, who found there a remote place of great beauty, inhabited only by an indigenous tribe and a few fishermen, a simple and hospitable population that still preserves the tradition of rafting in the sea. Some of these “hippies” settled here, married the locals and had children. So you can find many descendants of Swiss, French and other Europeans. Canoa Quebrada was again the scene of a film in 1997, with the production of Bela Donna, Bruno Barreto and the direction of Fábio Barreto), which has since become one of the most important tourist destinations in Ceará.

At night, locals and tourists meet on the main street known as “Broadway”, which is influenced by the rhythm of Reggae and Forró. Currently, the region is protected by the Canoa Quebrada Environmental Protection Area (APACQ), which covers an area of ​​about seventy thousand hectares. The beach was the scene of the filming of Malhação in 2009 by Rede Globo.

Broken Canoe is one of the most spectacular beaches in Ceará and is a tourist destination for travelers from all over Brazil. The old fishing island, discovered between 1960 and 1970 by backpackers who prefer completely rustic places, belongs to the municipality of Aracati and today is an attraction with good infrastructure and attractions that conquer all tastes.

When the cliffs in contact with the sun take on bright reddish contours, the sea is breathtaking. It’s impossible not to order a drink and sit at a beachfront bar or even stroll along the sand and dunes and enjoy every moment in a place with good bars, restaurants, clubs and accommodations.

Do you want to visit Ceará and spend a few days in a quiet place, with a bucolic atmosphere and at the same time comfortable and full of attractions? Follow these tips and enjoy unforgettable moments in Canoa Quebrada. In Canoa Quebrada there is no bad weather, since the climate of the region is stable in almost all months of the year and, although the rain is more frequent between the months of March and May, the sun still shines during this period, that is, the beach is right. On average, the temperature is between 27ºC and 29ºC and can increase a little more in the summer.

Despite the stable weather, the high season – between December and the end of February – is considered the best time to travel in Canoa, as the region is full of tourists, the local services are of better quality and there are more tours available. School holidays between June and August can also be considered high season.

Don’t forget to put sunscreen and repellent in your pocket and use them often. Beautiful landscapes and inviting seas are synonymous with beach all day, so before spending your free time apply sunscreen and always reproduce after a few dips in the sea. Likewise, use repellent before going to bed or during walks to avoid annoying mosquito bites.

Wear light and comfortable clothes. As the weather is warm, there is no need to wear a lot of jeans, long-sleeved shirts, or thick fabrics. Prioritize tank tops, light shorts and thinner shirts. You will feel much better. Book in advance at your hotel or guesthouse if you want to travel in high season, as the region is usually very busy. And be aware of airfare deals that can occur at any time, who knows you’re not taking off at a very low price? If you want to enjoy a dune buggy ride, contact your local boxing club when you arrive. It will be much easier to combine tours and negotiate better prices.

Although it is a city with a good tourist infrastructure, the Arati section, which corresponds to Canoa Quebrada, does not offer the same services as a medium or large city. For example, there are no ATMs open 24 hours a day, only Banco do Brasil, Caixa and Bradesco. In the central region of Aracati there are bank branches at Bradesco, Banco do Brasil, Caixa and Banco do Nordeste. You don’t want to do everything at once, organize a program with what you want to enjoy and enjoy each attraction in peace. No stress! The streets of Canoa Quebrada have a cobblestone floor, so tennis is a priority when you go for a walk during the day and night.

Those who like to experience emotions and that indescribable cold in their belly cannot fail to do some – or some of the famous buggy rides through the dunes of Canoa Quebrada. And if you’re afraid of speed or want to drive with your kids, ask the driver to take an “emotionless” trip and he’ll drive the track slowly. It’s easy to enjoy this package: just contact the Canoa Quebrada Boxers Association and plan your fun.

In high season many people offer cheaper races, but even if you are a little more expensive, you should choose the association guys because of the safety guarantee, ok? For the visitor who loves the sea, sea rafting from Canoa Quebrada is an excellent thing. The rafts are handmade boats that move thanks to the action of the wind and on the way that lasts about 30 minutes and is completed safely from the sea, you can look at the landscape from a new perspective and even a dive. Perfect!

Broadway is the most important and famous street in Canoa Quebrada. There are the best bars, restaurants, clubs, clothing and craft stores, pharmacies and ATMs, and it is also the meeting point for tourists and locals in the dark. It is very lively, it is worth arriving from the beach or a pleasant walk, swimming in the hotel and enjoying the atmosphere of the street. It is unthinkable to go to Ceará and not take a single day to dance a meal, the most popular rhythm in the state and in the entire northeast region. Meu Xodó’s house is fantastic! The tourist can have fun all night long.

Paragliding is a great program for those who want to enjoy the view of the cliffs and the sea of ​​Canoa Quebrada from above, feeling the wind in their faces and a lot of emotion. It’s a 10 or 15 minute flight from the churchyard.

The tour is possible by canoe and is an incredible program that can be done with friends and family. The horses are very kind and the route is guided by guides, so that, even if you are not used to horses, you can enjoy them calmly. Brazil and watch the sun start from the highest point in the world.

On the same day as the dune buggy ride, how about going down a 300-meter cable car (considered the longest in Ceará) to a clean and refreshing lagoon? This attraction is a favorite among travelers, so it is always controversial. In addition to going down to the dunes by cable car, you can enjoy Esquibunda and the best: after the descent, you will have at your disposal a car that will comfortably take you to the top of the dune. What administration! Classes or just a stay from morning to late afternoon at Canoa Quebrada beach is one of the best of the aforementioned simple experiences. The visitor will enjoy the breeze, the warm sea water and the excellent facility to relax, eat very well and even stroll along the strip of sand admiring the cliffs.