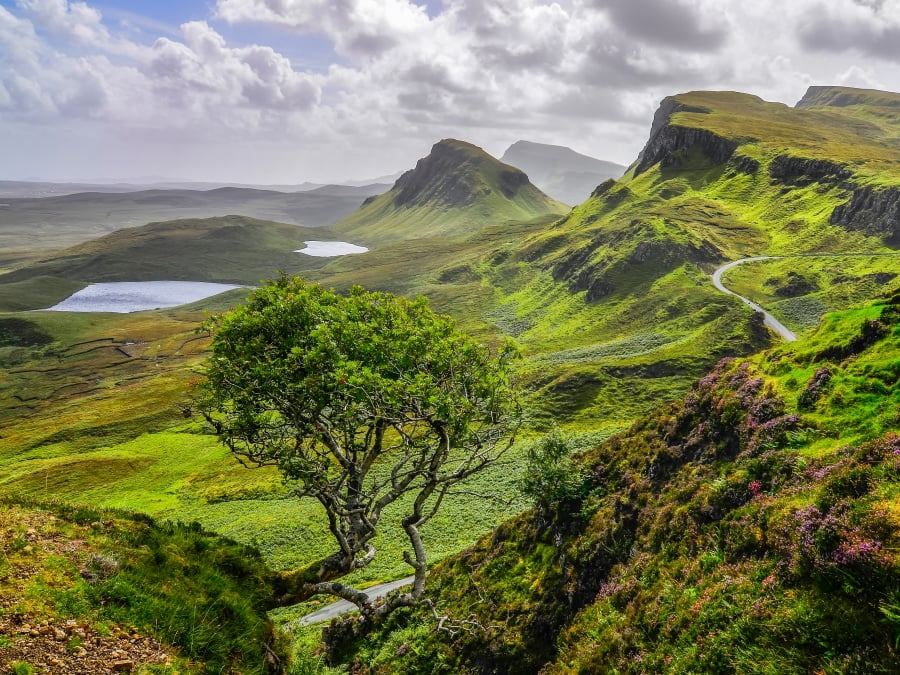 Scotland is the northernmost territory of the three countries that are on the island of Great Britain and although it shares history, currency and some traditions with its neighbors England and Wales, it actually has a unique essence that travelers fall in love with.

The greenery of its sometimes stark territory transmits magic and it is not difficult to think of fairy tales, knights and magical creatures. But since there are classics that are not forgotten, we share 10 classic things to do in Scotland.

Visit the magical city of Edinburgh

The capital of the country is a city full of value that has survived war and cultural invasions, remaining standing and preserving a unique atmosphere. It has something for everyone: a castle with royal jewels, mountains with natural viewpoints, museums and even legends on every corner.

If you like Harry Potter, this city is closely linked to the little wizard, since its writer JK Rowling wrote a large part of the story in Edinburgh and there are some places that its fans visit. In this article we share places related to this novel in the United Kingdom.

It is best to hire a guide or take a free walking tour to delve into the history and secrets of this unforgettable metropolis.

#TipAXM: Be sure to check out the Stone of Scone (in Gaelic: Lia Fail), also known as the Stone of Destiny or Stone of Coronation, in the crown jewels room at Edinburgh Castle, which was used in the coronation ceremonies of the Scottish kings during the Middle Ages and today in the accession to the throne of the head of the United Kingdom.

Get to know Stirling Castle

Like the one in Edinburgh, the castle of the city of Stirling is located on a hill. With two cliffs on its sides, this 15th century construction has incredible views and a route full of history.

Crucial in the history of the country as the scene of the Scottish Wars of Independence or the Jacobite uprisings, which tried (in vain) to restore the Stuart family to the throne, it currently has a museum in which different historical and war objects are exhibited.

An unmissable site in Scotland.

Also read: Between fairies and castles: an unforgettable journey through Scotland

Fall in love with the Isle of Skye

Also known as the Isle of Fairies, it is the largest of the Inner Hebrides and its stunning landscapes will take your breath away and envelop you in the magic of its natural beauty.

The arrival could not be more spectacular as its status as an island forces travelers to take the Skye Bridge on the A87 road from the Highlands. The rugged landscape of the country becomes more desolate and green as we go.

One of the oldest traditions in the area, are the clans. These groups of people who by descent and place of birth united people in groups can be understood by visiting the castles of Dunvegan and Armadale (belonging to rival clans). In addition to admiring its century-old architecture, you can see wild seals resting on its beaches and gardens with spectacular views.

It is also unmissable to take a walk through “Fairy Glen” or Valley of the Fairies, where its intense green landscape, its mountains and lagoons known as “fairy pools” will be an unforgettable site on your walk through Scotland.

#EYE If you are fans of Harry Styles, the video clip Sign of the times, his first solo single, was recorded on the island.

Go to a whiskey distillery

This important drink in the country is a way of life for the Scots. Its traditional elaboration can be known during a visit to one of its distilleries and why not? Try the product.

Scotland is divided into five whiskey-producing regions: Campbeltown, Highland, Islay, Lowland and Speyside. The flavor and tradition will depend on the area you want to visit, a great experience in the country!

Travel back in time at Skara Brae

This Neolithic settlement on the Mainland, the largest of the Orkney Islands, was inhabited between 3100 and 2500 BC. C. Due to its good state of conservation, it was declared a World Heritage Site by UNESCO.

Like Stonehenge in England, the age of this site gives it a mystical aspect and travelers can venture theories about the humans who inhabited these lands thousands of years ago.

Eilean Donan Castle is located off the Isle of Skye on Loch Duich and has appeared in several films including Braveheart, 007: The World Is Not Enough, and was even the inspiration for Brave’s Merida Castle.

In addition to having a privileged location with unforgettable views in the middle of the mountains and by the lake, it is possible to visit it and learn a little about the clans and what life was like inside them.

Escape to the island of Staffa

Remember the legend of the Giant’s Causeway in Ireland? It mentions that there was feud between an Irish giant and a Scotsman. On the island of Staffa, near the coastal town of Oban, you can find the “Fingal’s Cave”.

To get there you must take a ferry and the tours generally include other islands such as Mull. However, the visit to Staffa will provide you with impressive views (we seem parakeet with this, but Scotland really falls in love) and the icing on the cake is walking on basalt stones, the same as those of the Giant’s Causeway in Fingal’s cave.

Tour the city of Glasgow

Despite not being the capital of Scotland, it is the largest city in the country and one of the most populated in the United Kingdom. Glasgow is a dynamic, modern and constantly evolving city that, despite its industrial past, has been adapting to a more attractive essence for tourists.

Whether spending the afternoon in a pub, taking pictures of its street art murals and eclectic architecture, enjoying its music scene (Franz Ferdinand is from this city) or discovering its museums, this city will not disappoint.

See Northern Lights in the Highlands

The best time to see them is on cool nights and clear skies with little light pollution in the fall and winter months, where periods of darkness are longest. They usually start to see each other from October.

Although the Northern Lights can be seen from anywhere in the UK, the Scottish Highlands and Islands are more likely to see them. These are some places where, hopefully, you could admire them:

Try their sweets and gastronomy

We are part of the “Gordos por el Mundo” clan and to honor our history, when traveling we cannot ignore the flavors. Among the dishes that cannot be missed in Scotland are:

Aberdeen Angus beef, Stornoway black pudding, Arbroath smoked fish and Shetland salmon or shellfish. In addition to the Scotch whiskey, the malt beers, the scones or the butter cookies are not to be missed.

For the bravest, haggis is the quintessential Scottish dish.