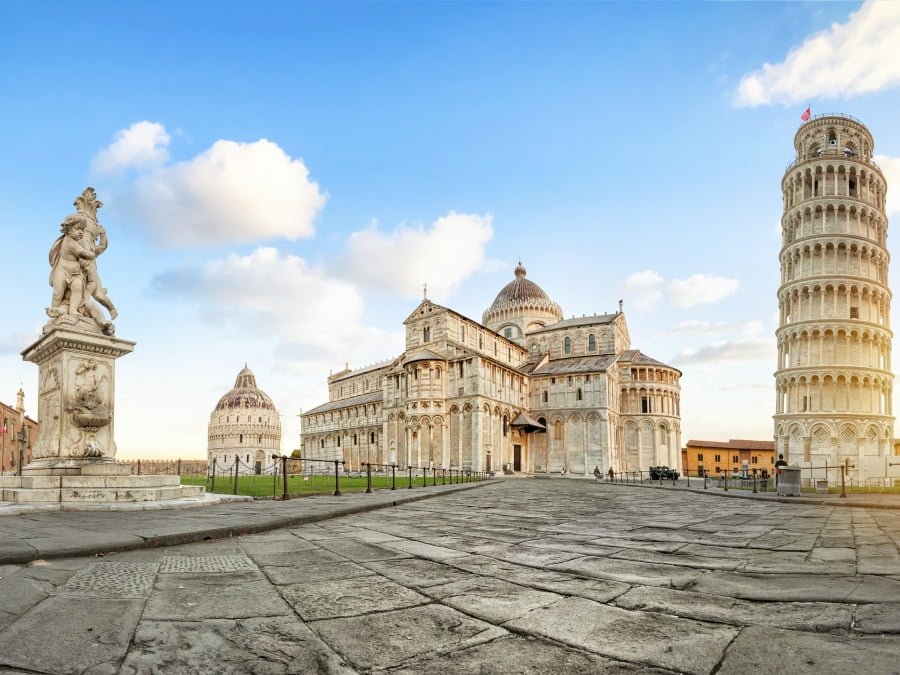 Pisa is one of the most recognized cities in Italy, its famous leaning tower is a postcard of many travelers who go to it to take a photo and many times they only stay with that. Visited only for a few hours by hundreds of tours, this destination has other great surprises for visitors who spend at least one night.

If you are planning a trip through the Italian Tuscany and one of your stops is Pisa, we share with you 7 things that you cannot miss in this city.

Let’s start with its most famous monument, which is also one of the most visited in Italy: the bell tower of the Pisa Duomo, better known as the Leaning Tower.

The tower began to lean during its construction in August 1173 and its original height was 59 m and it currently measures 57.67 m from the base on the highest side. In 1990 an ambitious restoration began to stop its deterioration and prevent its fall, which lasted 20 years.

Although the classic photo is the one stopping the tower, it is possible to visit it. If you want to see it from the inside, you must book in advance at this link and check the prices (admission alone costs 20 euros) and the entry conditions at the time of your trip (the pandemic brought requirements that change from one moment to another) . https://www.opapisa.it

The medieval cathedral is located in the center of Piazza dei Miracoli and is dedicated to the Assumption of the Virgin, as well as being the episcopal seat of the city.

A representative work of Romanesque art shows the tangible testimony of the prestige and wealth achieved by the maritime republic of Pisa at the time of its heyday. The entrance to the Duomo is free and here you can consult the liturgy schedules.

Located opposite the cathedral, the Pisa Baptistery is the largest in Italy and one of the most impressive in the world. With a diameter of 36 meters and a marble coating, it steals the attention of the Leaning Tower.

Inside, you will find an impressive octagonal baptismal font, placed in the center, and when you buy your ticket you can climb to the top to have incredible views of the Piazza dei Miracoli.

The combined ticket with the cathedral is 7 euros, but if you want to enter you can buy the pass for 27 euros which includes all the monuments and museums in the square, including the tower.

There is nothing like being surprised during a trip and walking through the streets of a new city is one of the greatest travel satisfactions and the Borgo Stretto alley is one of the most charming places in Pisa.

Walking through this street that still maintains its style and medieval buildings is a journey through time, take a break!

In the Historic Center of the city you will find some places to eat, shop and hang out, due to its strong tourist orientation. Within this area, Piazza Garibaldi is another must-see in Pisa.

The square is located at the northern end of the Ponte di Mezzo and is flanked on three sides by buildings of historical importance that defined social and cultural life in Pisa until the Modern Age. In the opposite corner is the old Casino de los Nobles, which emerged in the mid-eighteenth century and was instituted for the recreational activities of the aristocracy.

Squares in Italy are always a great way to discover local life and fall in love with the architecture that adorns them and that is the case with Piazza dei Cavalieri, where the city’s ancient Roman forum was located.

The square was the political center of medieval Pisa, a place of meeting and celebrations and today the second most important after Piazza dei Miracoli. When visiting it, do not forget to observe the magnificent façade of the Palazzo della Carovana and visit the Church of Santo Stefano.

#TipAXM In the center of the square you can see the statue of Grand Duke Cosimo I de’ Medici, founder of the Order of the Knights of Saint Stephen.

This bridge that crosses the important River Arno (which frames Tuscany) since the 11th century was rebuilt after a bombing in World War II and is one of the nerve centers of the city. It is 89 m long and has a structure with a single arcade 12.5 m high, made of reinforced concrete and covered in white stone from Verona.

Since the second half of the 17th century, the bridge has been the venue for the game of the same name, in which the two districts of Pisa (Mezzogiorno and Tramontana) compete for the conquest of the bridge by pushing a cart until one of the two teams manages to take it to the right side. adversary.

With an area of ​​180 square meters, the Tuttomondo is located on the outer wall of the church of San Antonio Abad and is the last public work of the American artist Keith Haring before his death.