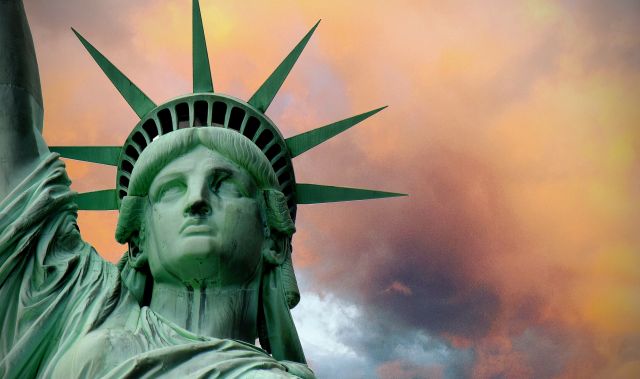 Inaugurated on October 28, 1886, the Statue of Liberty is undoubtedly one of the most famous landmarks in New York, in the United States and around the worldso a visit to this emblematic statue is mandatory whatever the reason for your trip to what is also known as The City that Never Sleeps, The Big Apple or The Capital of the World.

The Statue of Liberty – A Bit of History

Liberty Enlightening The Worldknown simply as The Statue of Liberty, was a gift from the French people to the American people to commemorate the centennial of the United States Declaration of Independence, as well as a sign of friendship between these two nations.

The Statue of Liberty measures 92.99 meters from the ground to the torch, 46.05 meters high from its base to the torch, and is visited by more than 4 million people each year from virtually all over the world.

How to Visit The Statue of Liberty By Ferry

If you want to take a tour of the statue, there is nothing better than doing it by ferry from New York City, since among the various benefits you will get, it stands out that you will be able to learn more about the history and other curious facts about the Statue of Freedom from the hand of a fully specialized guide on the subject.

But the best of all is that the guide that will accompany you is bilingual. so you can enjoy this tour in Spanish and also the guided tour in Spanish offers an excellent discount, and it is worth mentioning that children under three years of age will not pay.

What Is The Itinerary Of The Guided Tour In Spanish To The Statue Of Liberty?

One of the advantages of taking the guided tour in Spanish to the Statue of Liberty is that the guide will already be waiting for you at a previously designated meeting point, so you will not have to spend on taxis, or travel by bus and get lost in somewhere in New York as happened to Kevin McCallister (played by Macaulay Culkin) in the film My Poor Little Angel 2 – Lost in New York.

However, you will be able to live first-hand the experience of traveling on New York’s public transport since you will travel accompanied by the guide on the emblematic train of the city to the place where the ferry will be taken.

Later they will board the ferry which will take them to the Island of the Statue of Liberty, but it will not be just a simple trip to the island since during the journey the guide will tell you the most important details of this island.

Finally, they will reach the Statue of Liberty from where you can appreciate it in great detail.

And of course the guide will provide you with information that will undoubtedly be very valuable to learn more about the history of the statue among other curiosities.

On the Island of the Statue of Liberty you will have time to take photos, tour it, and even buy some souvenirs or eat something delicious.

Getting to know Ellis Island

The beauty of this tour is that it does not end when you visit the Island of the Statue of Liberty, since from this place you will get back on the ferry to move to the Isla Ellis which is a small islet located in the port of New York.

On Ellis Island they will visit The Immigration Museum where they will learn the history of foreigners who arrived in the United States, that as a curious fact the first thing they saw was the Statue of Liberty.

From Ellis Island you can see the skyscrapers of Manhattan and the view of the Statue of Liberty is simply impressive.

Once this island is visited, you will return to Battery Park where the tour ends.

The guided tour in Spanish to the Statue of Liberty You can do it with the help of InterviajesNY, a travel agency based in New York that since 2014 offers you the most beautiful tours with great professionalism, punctuality, quality and of course at the best price.

This is how you can make your dream of visiting the Statue of Liberty come true, one of the most famous monuments in the world and a finalist in the 7 New Wonders of the Modern World.

If you have any questions, we will gladly remain at your service in the comments area, it will be a pleasure to help you.