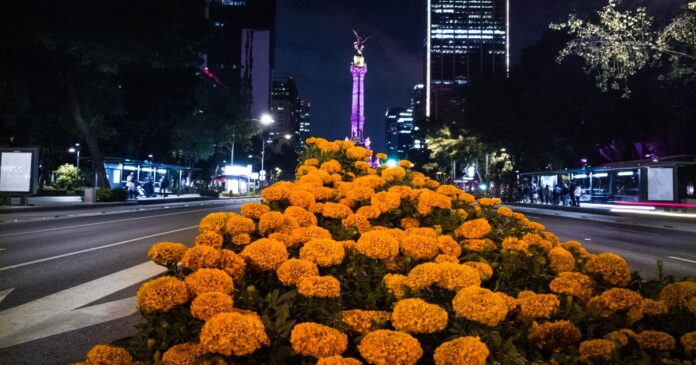 The Day of the Dead is one of the most emblematic traditions of Mexico, every year thousands of locals and travelers are part of the festivities in various parts of the country that remember our loved ones.

So this time we will share with you some of the activities that you can take part in to commemorate the Day of the Dead in Mexico City.

The Parade of Monumental Alebrijes of the Museum of Popular Art marks the beginning of Day of the Dead activities in Mexico City.

This year its fourteenth edition is celebrated and it will take place on Saturday, October 22 at 10:00 p.m. on Paseo de la Reforma.

At the end of the parade, the alebrijes will be exhibited on Paseo de la Reforma until November 6.

On October 23, at 11:00 a.m., the Mega Procession of Catrinas will take place from Chapultepec to the Zócalo.

This event is family and everyone can be part of it, they just have to dress up as catrina or catrín.

Monumental offering in the Zócalo

From October 28 to November 2 where you can see 32 monumental catrinas that represent the states of the Mexican Republic.

In addition, for the first time, the Zócalo will have lighting alluding to the Day of the Dead. And weather permitting, a nightly drone show will be offered. The first is planned to take place on October 25 at 8:00 p.m., weather permitting.

In Paseo de la Reforma, monumental skulls intervened by national and international artists will be exhibited.

The objective of the maxicranios is to exalt the Mexican culture.

Community procession of the Day of the Dead

On October 29 at 11:00 a community procession will take place that will go from Chapultepec to the Zócalo of the capital.

This procession will be the prelude to the Day of the Dead Parade.

Day of the Dead Parade

This year the V edition of the Day of the Dead Parade will be held; It will start at 5:00 p.m. and will go from Chapultepec to the Zócalo.

The parade will be made up of 1,200 participants, 344 musicians from various parts of the country, 162 guests, 10 allegorical cars, 29 pushable units and four monumental balloons.

The tour is expected to last between three and four hours.

Day of the Dead in Chapultepec

The Iluminando Almas tour will take place in the Bosque de Chapultepec, where floral altars, monumental figures of skulls, Catrinas and Catrines will be seen. There will also be light and sound experiences and live music.

The National Autonomous University of Mexico will install its already traditional mega-offering in the Plaza de Santo Domingo and Plaza 23 de Mayo.

This edition will be dedicated to the 100 years of muralism in Mexico.

If you are in Mexico City during this season, you can take part in some of these events to get to know and be part of one of the most important traditions in Mexico.