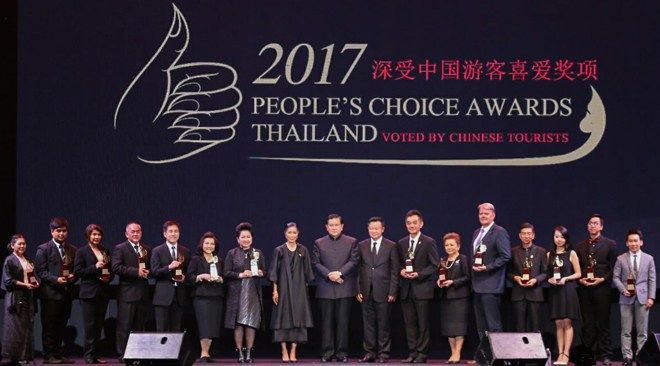 The Tourism Authority of Thailand (TAT) has announced the 14 most popular tourist attractions and activities as well as medical and wellness services in Thailand among Chinese tourists.

The winners of the 2017 People’s Choice Awards Thailand Voted by Chinese Tourists are:

Chinese who have travelled to Thailand were invited to vote via the website www.peopleschoiceawardsthailand.com between 26 May to 8 June, 2017, in 14 categories; such as, tourist attractions, hotels, restaurants, medical and wellness services, spas, shopping centres, golf courses, etc. The voting attracted a total of 3.7 million votes, and the publicity given to this activity was estimated to reach an audience of 45 million.

They were enticed to participating in the voting activity with a lucky draw prize. The first prize is a five-day holiday for two in Thailand, including return air tickets on Thai Airways International and accommodation. The next five prizes are also return air tickets for two to Thailand on Thai Smile Airways, NokScoot Airlines, Thai AirAsia, Bangkok Airways and Thai Lion Air. Over 100 other prizes are also being offered including vouchers for accommodation, spa treatments, dining, shows and entertainment, and much more.

During the first four months of this year, Thailand welcomed 12 million visitors, spending around 620 billion Baht, an increase of 4.71% from the same period last year. In this number, 7.5 million came from East Asia generating 308 billion Baht. China remained the leading source market at about 3.2 million arrivals, who   generated 161 billion Baht in tourism revenue.