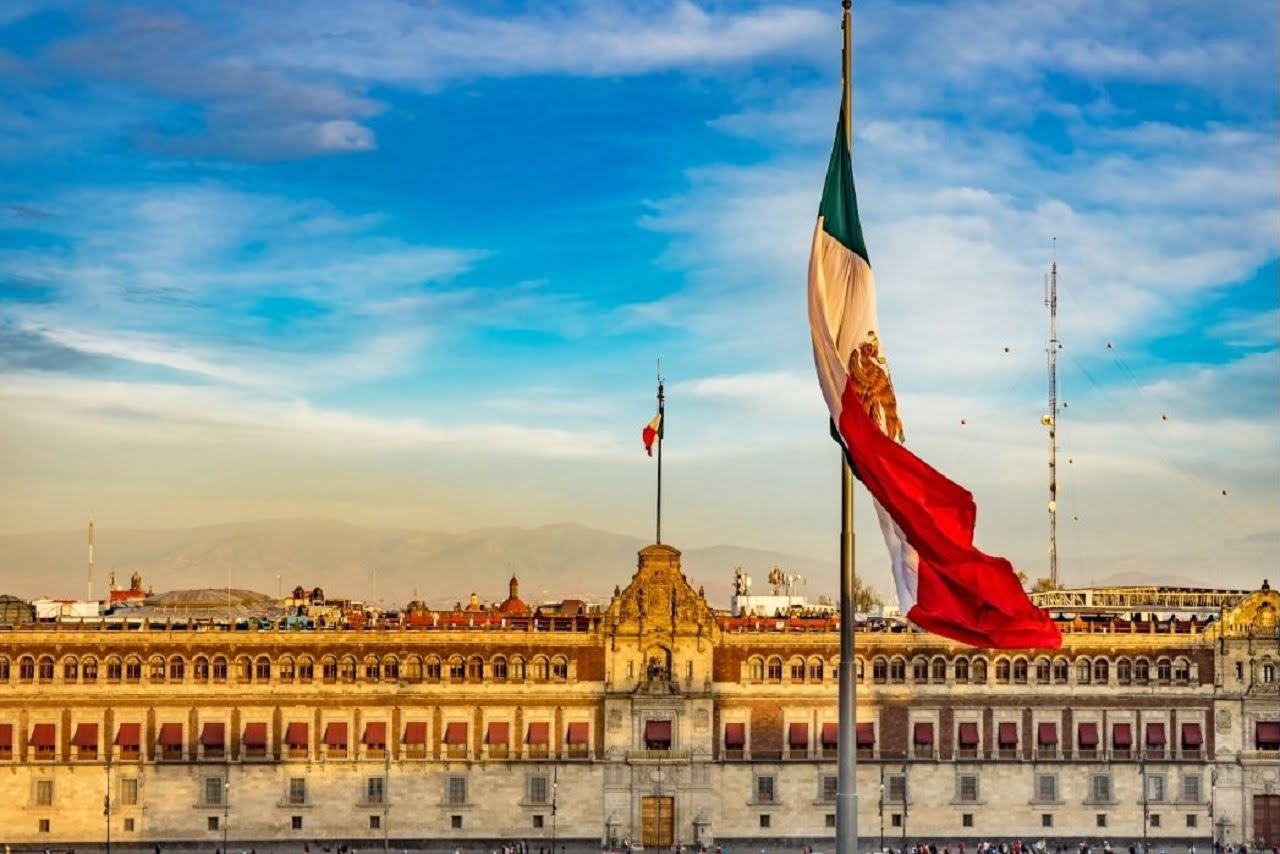 When you visit a country for the first time, you admire everything you see, and without a doubt, the national symbols are part of that discovery of the culture and idiosyncrasy of the people you visit; It is time to immerse ourselves in the history of Mexico in this post “Mexican flag, meaning and colors“.

Whether you are Mexican or Mexican touring the country or a foreigner who visits it, seeing the huge national flags waving at different points of the chosen destination is surprising.

Feelings such as respect, admiration, pride, are present in the journey through this beautiful country, and needless to say when you visit the Zócalo in Mexico City during the hoisting and lowering hours of each day, or the national holidays in September, when the colors green, white and red embellish every corner of Mexico.

Such beautiful shows, they deserve to know a little more about their history…

Although one can believe that the current Mexican flag was created a couple of centuries ago, the reality indicates the opposite; it was only in the 60s of the last century, when its design was finally defined.

Throughout the history of the country there were several Mexican flags, depending on the bibliographic source that one consults, there will be about 4, 7 or 8 different flags.

Taking as a source the review of the data exposed on the website of the Government of Mexico, the country had 4 official flags and others that arose from the historical and political situation of the moment are added:

The banner with the image of the Virgin of Guadalupe that the priest Miguel Hidalgo wielded during the Grito de Dolores (fight for independence), is considered the first Mexican flag.

After the war of independence, the government of Agustín de Iturbide adopted the tricolor flag of the first Mexican government, for some the second Mexican flag, for others the first.

This already included the figure of the eagle perched on a nopal, as well as the crown of the Empire and the shield in the center with the image of the eagle, although it was not like the current one.

On the other hand, it is said that the second flag was the one used by Benito Juárez when he assumed power and established the Republic, similar to the previous one but with a “Frenchified” eagle.

The third National Flag is the one shown at the time of the empire of Maximilian I of Mexico; its design had changes in its proportions, in addition to the fact that four crowned eagles were placed in each corner of the flag.

This was in force until 1867, the death of the Austrian monarch.

During the presidency of Gustavo Díaz Ordaz, in 1968, the Fourth National Flag was adopted by decree, which is what we currently know, confirmed by law on February 24, 1984. In it, the shield with the eagle, are in both sides. 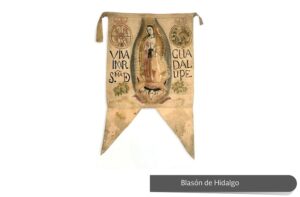 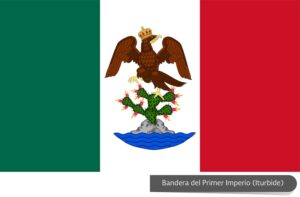 Tricolor flag of the Trigarante Army during the Plan de Iguala; white, which meant the Catholic religion, green independence and red the union of the Mexicans.

Flag carried by the cristero movement, with modifications such as placing the image of the Virgin of Guadalupe on the eagle and the legend “Long live Christ the King and Our Lady of Guadalupe”.

The Carranza Flag, with which it was intended to mark the end of the Porfirista regime; an eagle was placed in profile alluding to the Republic.

The Flag of 1934 appears as part of the legislation for the national symbols of that year; the stroke of the National Shield is modified. It was in 1940 when President Lázaro Cárdenas made February 24 official as Flag Day. 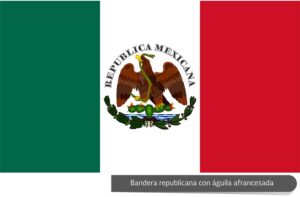 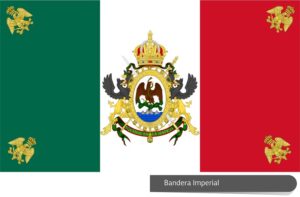 Green symbolizes the hope of the people in the destiny of their race;

Red identifies with the blood that the heroes shed for the country. 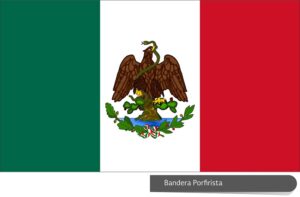 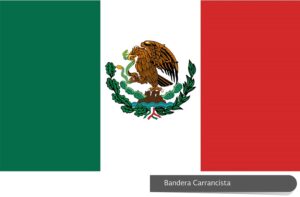 Shield of the Mexican Flag

The shield of the flag represents the legend that narrates when Huitzilopochtli prophesied to the Aztecs, during their migration from Aztlán, that they should look for an eagle perched on a cactus with a snake in its claws in a lake.

Seeing this scene, they founded the city of Tenochtitlán, present-day Mexico City, on that spot.

The eagle was modified seven times throughout history, until in 1969 it became what it is today. 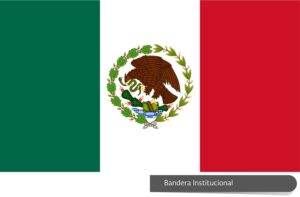 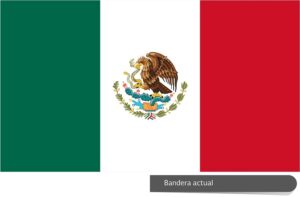 In 1999, under the mandate of the then president of Mexico, Ernesto Zedillo Ponce de León, the Monumental Flags of Mexico program was created; the general objectives of the law were to promote the Mexican flag, coat of arms, and anthem to instill a sense of patriotism in the population.

In Mexico City, three were located, one in Tijuana, one in Ciudad Juárez, along the border; time later one more in Veracruz, being the main seaport of Mexico, another was assigned to Iguala, where the flag of The Three Guarantees was recognized as the first flag of Mexico.

Over time, more monumental flags were installed, so we found the highest flagpole of 125 meters in Durango, another of 120 meters was built for a 60-meter-wide national flag in Piedras Negras, Coahuila.

How about taking a tour of all those sites and taking a nice selfie? Dare to live that experience, a very good excuse to travel and enjoy! 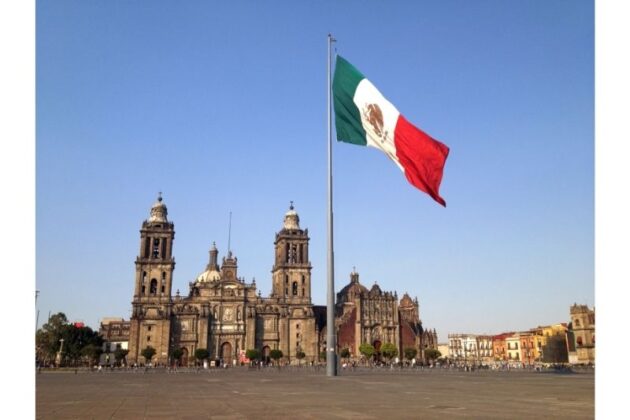 In 2008 the Spanish newspaper 20 Minutes, carried out a survey with the intention of choosing the most beautiful flag in the world; the Mexican flag was the winner against 104 other countries, obtaining more than 900 thousand points.

There are times when it is necessary to destroy a replica of the flag, it may be due to poor condition, for example; in that case it must be done through the cremation process with honors (playing the anthem), being an official patriotic symbol, it cannot be disposed of in any other way.

Who has not ever wondered who manufactures the flags, the answer is: the Secretary of National Defense (SEDENA) is responsible for this task.

The monumental Mexican flag that is in the Zócalo of CDMX, has a hoisting time at 8 am and a lowering at 5 pm; Although it has an electric mechanism to move it, around 15 military policemen are needed to carry its more than 200 kilos and be able to take it to its niche.