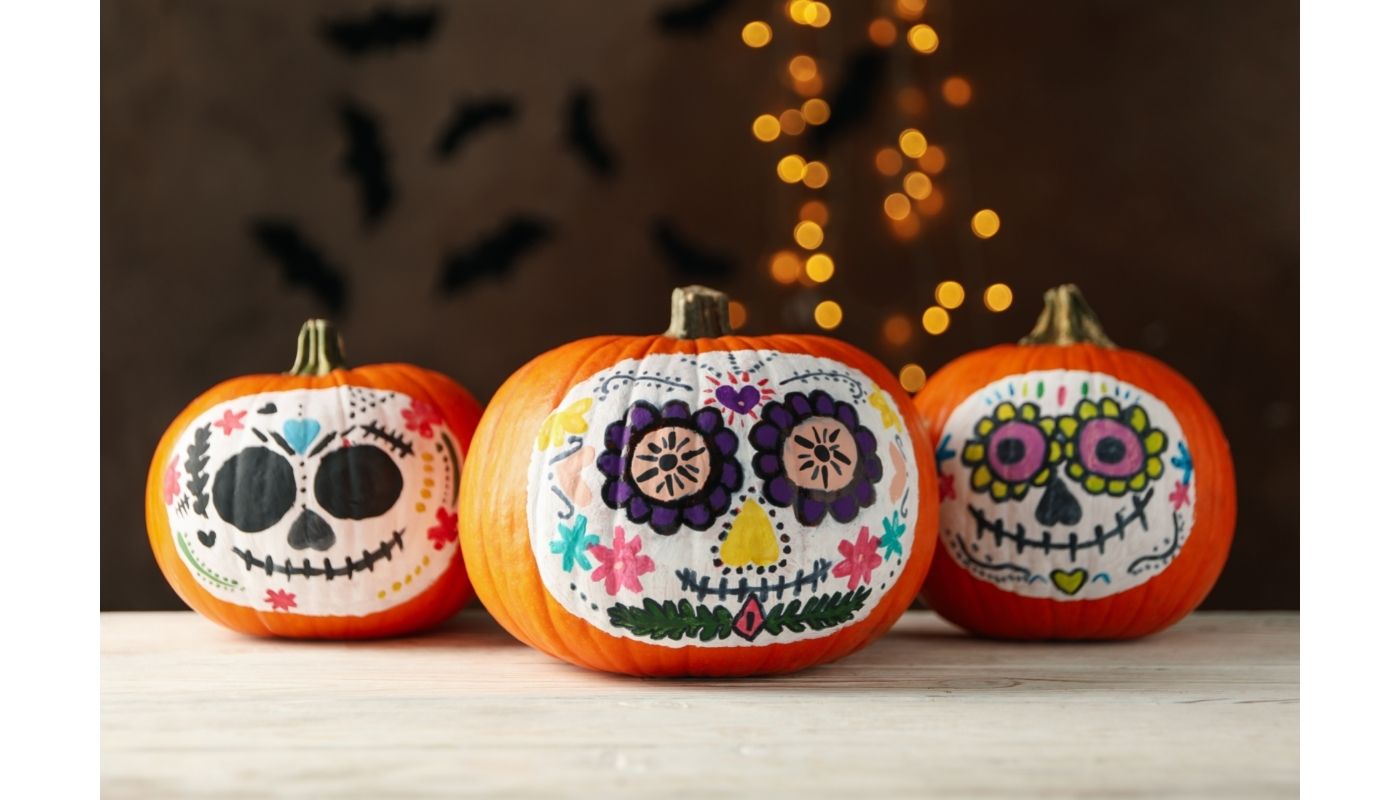 “Day of the Dead vs Halloween, which one to choose?”is an invitation to delve a little deeper into Mexican traditions… Now we tell you why?

We are already in the second half of the year, for many the best time… And although it is true that one is already accumulating some tiredness so far this year and even more so if you did not have vacations, it is nice to prepare for the celebrations that since September stop.

Of those celebrations, the Day of the Dead, is an event for Mexico, not for nothing was declared by UNESCO as Intangible Heritage of Humanity in 2008.

But, are the Day of the Dead and Halloween the same thing? Perhaps for many Mexicans the difference is clear, but for some it is not yet and even more so if it is a foreigner who asks the question…

That is why we are going to learn a little more about these festivities and thus choose consciously, do you think?

What are the differences between the Day of the Dead and Halloween?

The Day of the Dead is a Mexican holiday whose origin dates back to before the arrival of the Spanish; It is said that the roots are found in the celebrations of the Mexicas, Mixtecs, Texcocans, Zapotecs, Tlaxcaltecas, Totonacs and other native peoples of Mexico.

The celebrations were usually at the end of the harvests, but with the arrival of the Spanish and the imposition of Catholicism it was modified and became in November, to coincide with All Saints’ Day on the 1st and All Souls’ Day. on the 2nd, just as the colonizers commemorated their dead.

Halloween finds its origins in Samhain, an ancient Celtic festival; the belief is that during that night the spirits of the dead walked among the living and sacred rites were performed to contact them.

Halloween derives from the contraction of the Scottish “All Hallowsʼ Eve”, whose meaning in Spanish is Eve of All the Dead; It is celebrated mainly in countries with an Anglo-Saxon tradition such as Ireland, England, Canada, Australia and the United States.

The Day of the Dead in Mexico is celebrated on November 1 and 2; However, there are some places in Mexico where the dead have arrived since October 28 and it varies according to who it was, according to their age or also due to the cause of death. 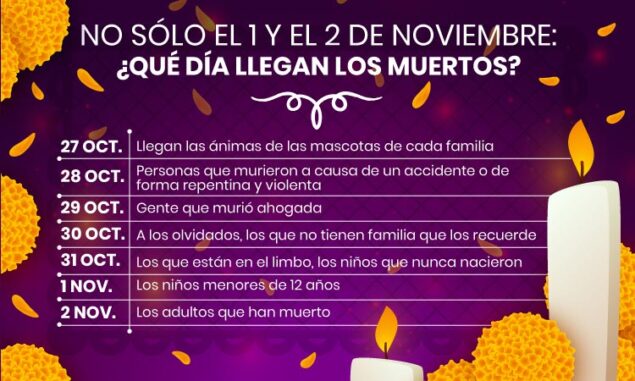 Unlike the previous one, Halloween is a celebration that takes place on October 31.

The Day of the Dead is a very special date for those who lost a loved one, it is the opportunity to remember and honor him.

As an emblematic film like Coco reflects, the Day of the Dead is really a celebration of reunion with loved ones who have already passed away.

Altars, decoration, music, pantheons full of people, are part of what is lived in those days.

Here is one more difference with respect to Halloween, since in this case on the night of the 31st it is considered that the spirits return in an evil way, so people dress up and decorate their houses in such a way that they cause fear and thus be able to scare them away. 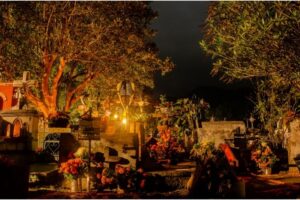 Symbols of each celebration

One of the most significant representations of the Day of the Dead is the Catrina, created by José Guadalupe Posada and baptized by Diego Rivera; like the alebrijes, fantastic animals of resplendent colors.

We also add the literary skulls that speak of death in a satirical way, the xoloitzcuintles dogs that accompany souls to the other world, the altars with the elements that honor the deceased, etc.

When we think of Halloween, pumpkins with candles inside are a classic; Add to that the scary stories, black cats, witches, horror costumes, among other alternatives that cause a lot of fear. 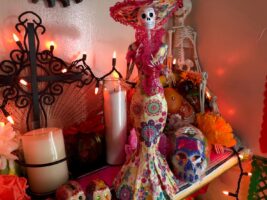 When October 31 arrives, the typical foods that you find on the tables of many families are those made with pumpkin; some options are breads, cakes, cookies, etc.

Also, you can not miss a good bag of sweets to wait for the children with the traditional “trick or treat”.

A different case is the menu for the Day of the Dead; the must-haves are the delicious bread of the dead, the skulls made of sugar, the mole is another of the most prepared dishes.

There are also places where they prepare up to 9 different dishes to fulfill the tradition of setting up their altar.

How is the Day of the Dead celebrated in Mexico?

Knowing the details that make the difference between the Day of the Dead and Halloween, we are going to learn a little more about what this traditional celebration in Mexico implies.

Although the commemoration of the deceased is held on November 1 and 2 in many countries around the world, especially by those who practice Catholicism, it is only in Mexico where celebrates Day of the Death.

This tradition that takes place in every corner of the country, finds similarities and differences when it comes to celebrating; the customs of each town may vary a little. 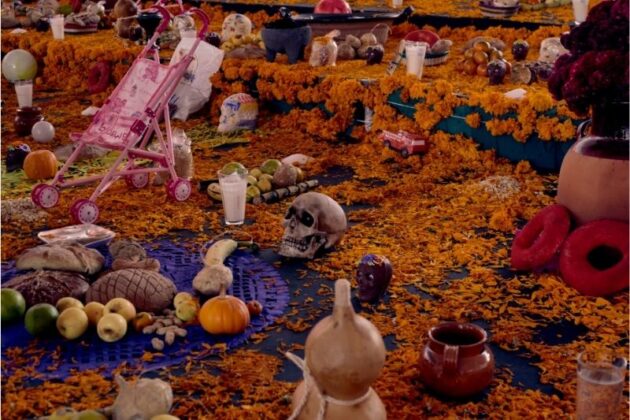 The must-haves for such a special day

Days before November 1, preparations begin; The main thing is to assemble the altar, for which a good purchase is necessary that includes:

The beautiful cempasúchil flowers are the ones that will mark the way to receive the visit of those who went ahead; it is said that in ancient times, this road went from the house of the deceased to his tomb in the pantheon.

Regarding the offerings, they depend on the tastes of the deceased(s); We talk about a wide variety of items such as food, favorite food preparations, toys, wines or drinks that you liked when you died and much more.

Added to this, the decoration includes a white tablecloth, salt, water, candles, chopped paper, the cross of ashes, copal, etc., and of course the photo or photos of the people to whom the altar is dedicated cannot be missing.

Another detail regarding this is that there are people who choose to set up the altar at home and others find in the pantheon, especially the tomb of the deceased, the best place for the celebration. 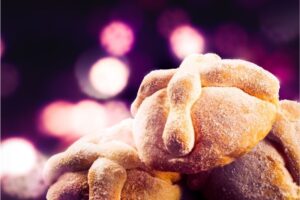 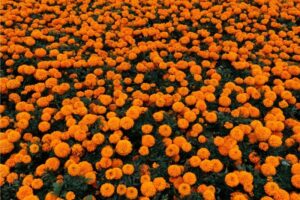 Most popular destinations to enjoy the Day of the Dead party

This beautiful Mexican tradition so recognized in the world, finds some places with very nice practices to live and enjoy with the family, to mention a few:

In Mexico City, the entire city gets ready, the Paseo de la Reforma, the historic center and other tourist sites are decorated with cempaxúchitl flowers; Also, you cannot miss the Day of the Dead parade and if you want more, visit Coyoacán or find the night tours and special celebrations in Xochimilco, they are well worth it.

Mixquic, is one of the places to visit these days; “La Alumbrada” takes place there, as tradition indicates, they light thousands of candles to illuminate the tombs decorated with flowers.

Oaxaca is another of the outstanding places to visit in this celebration; You will find beautiful multi-story altars, an incredible variety of breads of the dead that can even carry the portrait of the deceased, parades in the historic center and many more surprises.

Michoacán joins the recommended destinations; The towns around Lake Pátzcuaro celebrate with great fervor the days from October 28 to November 2. Surprise yourself with the procession of altars and other activities of those days.

As a bonus to enjoy the customs and traditions of the Day of the Dead to the fullest, do not forget to visit the markets and if you are a foreigner, do not be afraid and go to see a pantheon on that date, a unique and unforgettable experience.

And don’t forget to check the epidemiological light and take care of Covid 19.