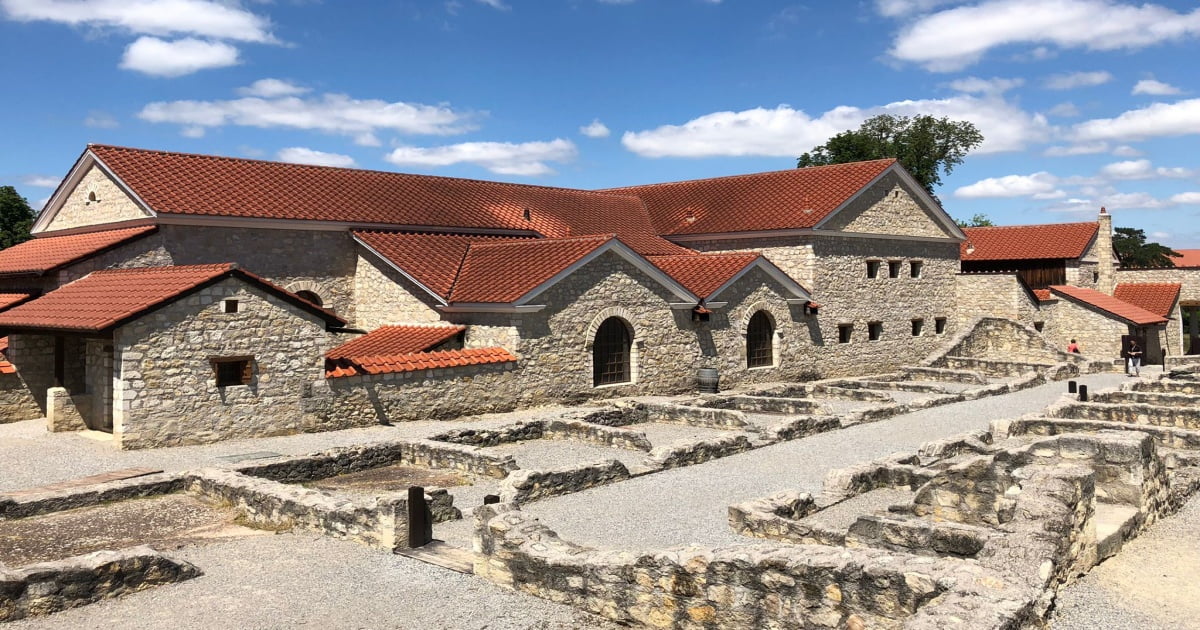 “Only those who risk going far can find how far they can go.” T.S. Eliot.

According to the WHO (2020), approximately 15% of the world population lives with some type of disability, in Mexico there are about 6,179,890, which represents 4.9% of the population.

The tourism industry is currently aware of this, for this reason it has clearly identified that promoting a responsible inclusion of people with disabilities, providing professional services (without falling into appearances, welfare and philanthropy), guarantees greater profitability and social recognition ( let us remember that we PwD make up 15% of the world’s population), which is why it has already begun to generate changes in its services.

An example of this is the airlines that are constantly updating their customer service processes with disabilities. Another clear example is Wheel the world, a travel agency that takes into account the characteristics of travelers with disabilities. 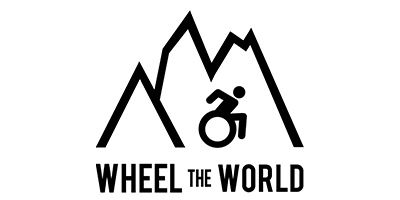 The inclusion of people with disabilities does not necessarily have to have an extra cost for “special services”, in fact, the ideal is that each public space from museums, schools, restaurants, to small and medium-sized companies are available to everyone.

You can begin to be inclusive for people with disabilities by indicating on Google Maps if they have an accessible entrance, menu in braille, personnel who speak sign language or have adequate toilets, before I go to a place I look for information and photographs to see what so accessible will it be for the wheelchair.

Of course, there is the possibility of falling into subjectivities, when the establishments provide wrong information or what they consider accessible is not really, to solve this the opinion of people with disabilities can be taken, it is important that we are part of the process of construction or adaptation of a service or space. 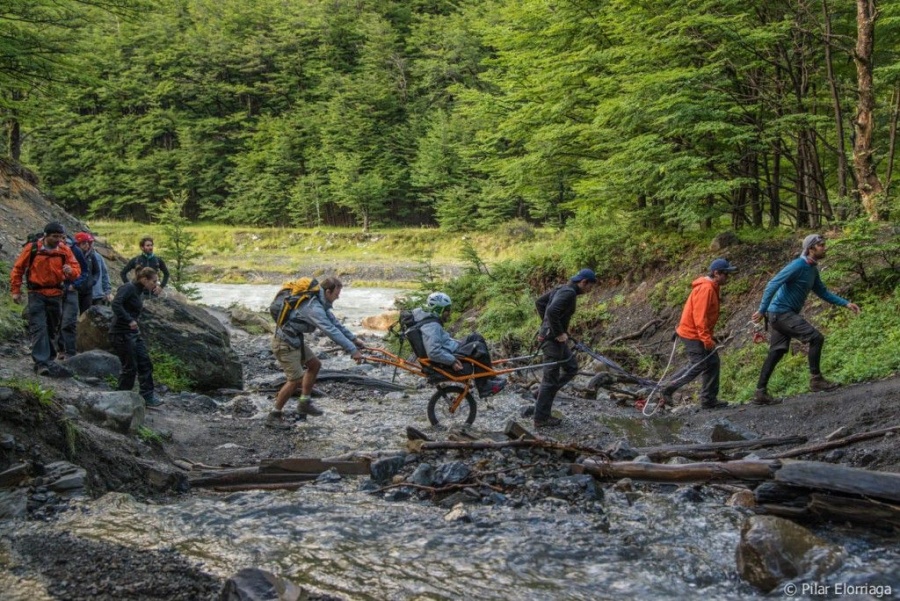 You have no idea how many ramps I’ve tried to use that are too steep or too narrow, you can tell at first glance that the person who built that ramp has never used a wheelchair. On the other hand, fortunately there are more and more guides written by professionals to advise those who are interested in implementing a Universal Design (functional for all people).

Another example is the archaeological zones that are not the most suitable place to visit, the land and the ruins are not exactly adaptable, since their very protection as a World Heritage Site prevents modification to implement elements necessary for people with disabilities, without however, it is not impossible. 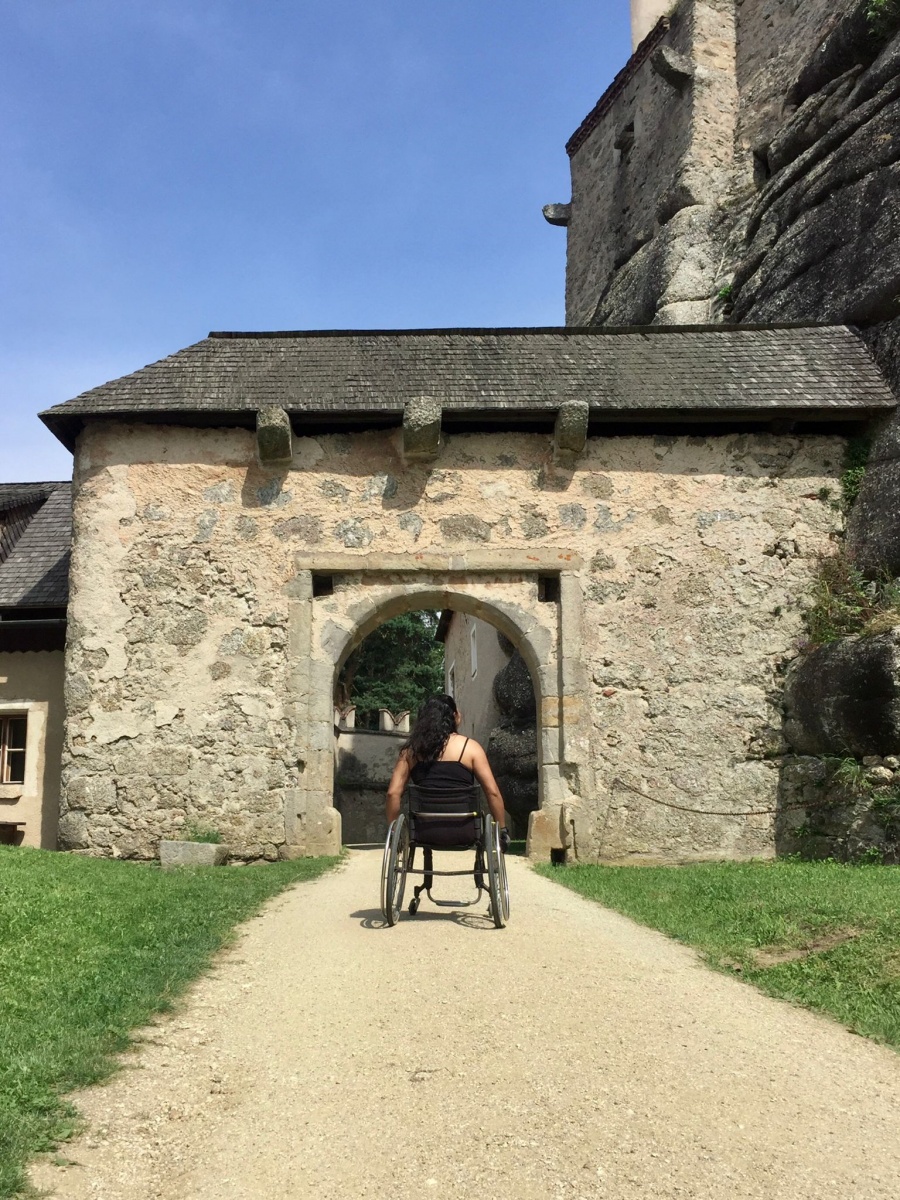 Next, I am going to tell you how the Carnuntum route made its visit possible for PwD thanks to a universal design.

The ancient Roman city Carnuntum is today an archaeological park whose impressive reconstruction brings visitors closer to knowing how Roman civilians and armies lived back then. Located in the state of Lower Austria, between present-day Vienna and Bratislava, it is part of the Danube “El limes” Borders of the Roman Empire, recognized by UNESCO as a World Heritage Site.

Carnuntum is recognized for showing not only Roman civil life, but also military life, in addition to its almost intact excavations, as it is one of the few discovered areas in which other cultures had not been built and settled after the fall of the Roman Empire.

The park itself is not sold as a 100% accessible place, they are honest and clear in the information they provide on their website as well as in the information modules. In the brochures they detail each aspect and place to visit, with icons showing which places can be entered with the chair and which cannot. 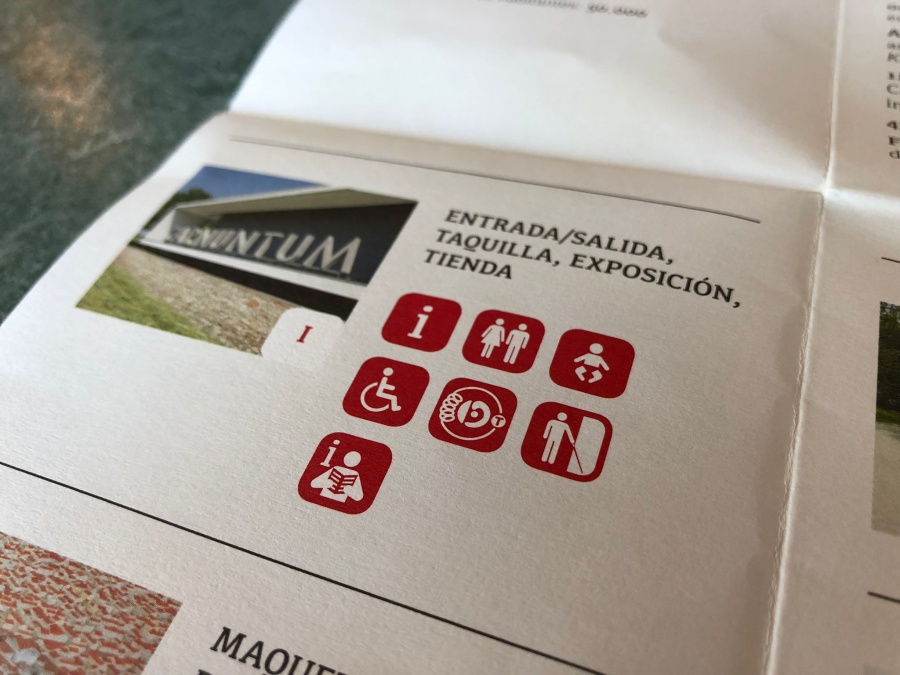 Also, when visitors with wheelchairs come to the park, the staff places provisional ramps so that they can access the largest possible number of spaces. 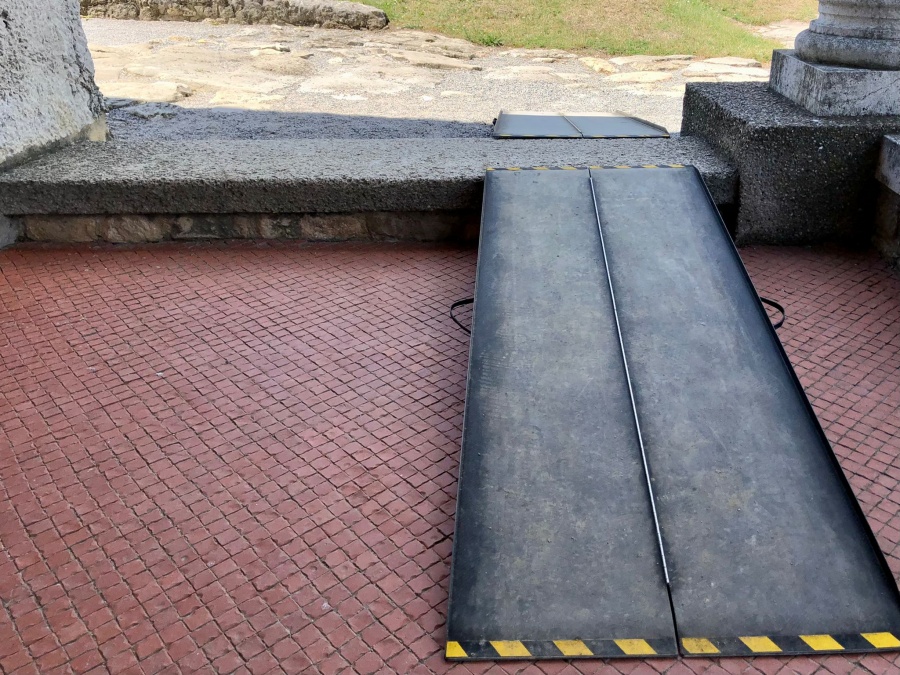 I. ROMAN DISTRICT. The tour of the park begins in this district, the Roman civil zone makes up most of the park, the old total area was 10 km2, however, the area discovered in the excavations has been only .5%, the park It’s big, I can’t even imagine how big the ¨municipium¨ was in ancient times, it is estimated that the number of inhabitants was 50,000. 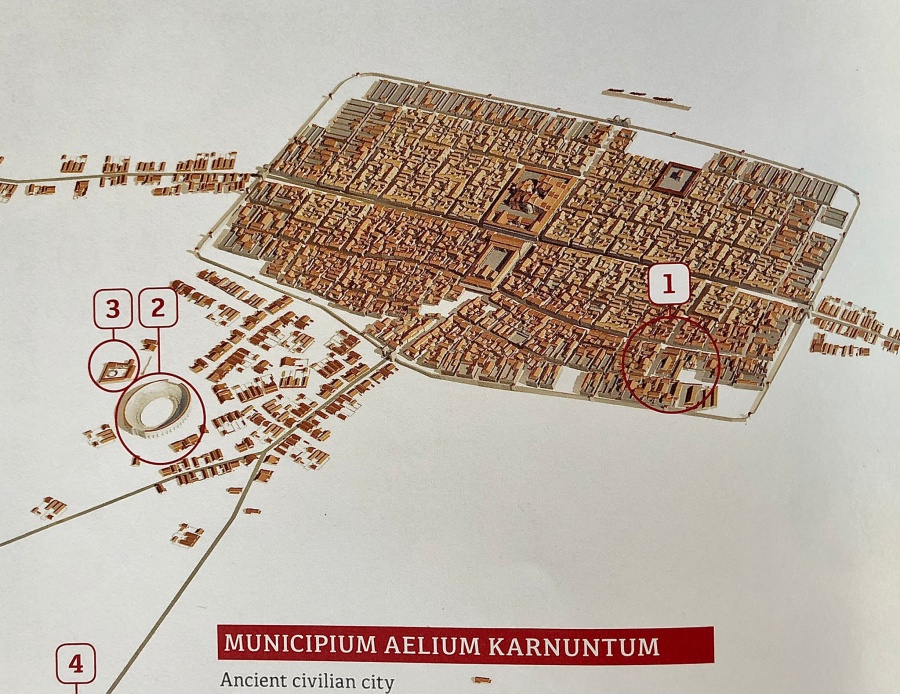 This section of the route is characterized by the amazing reconstruction work that allows you to visualize how Roman civilians lived. In this area you will find: 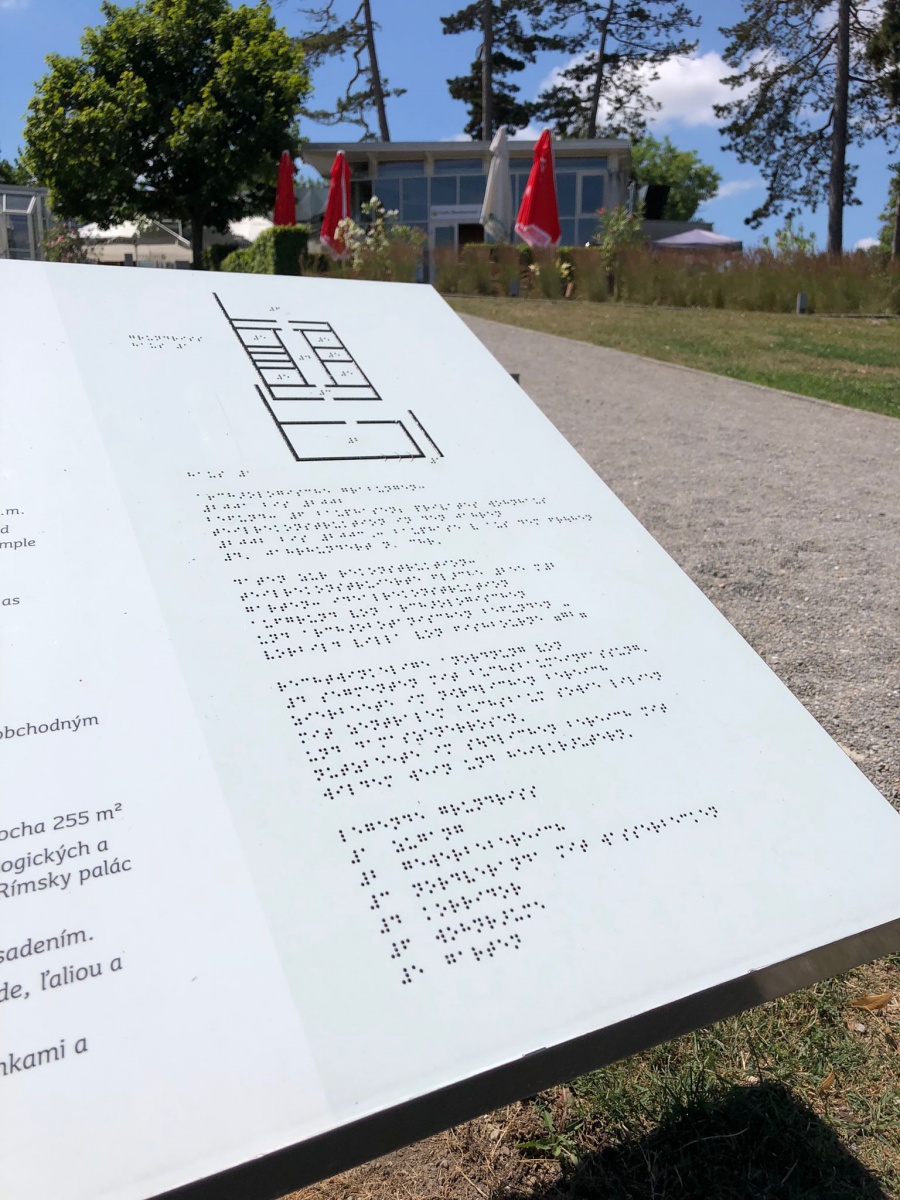 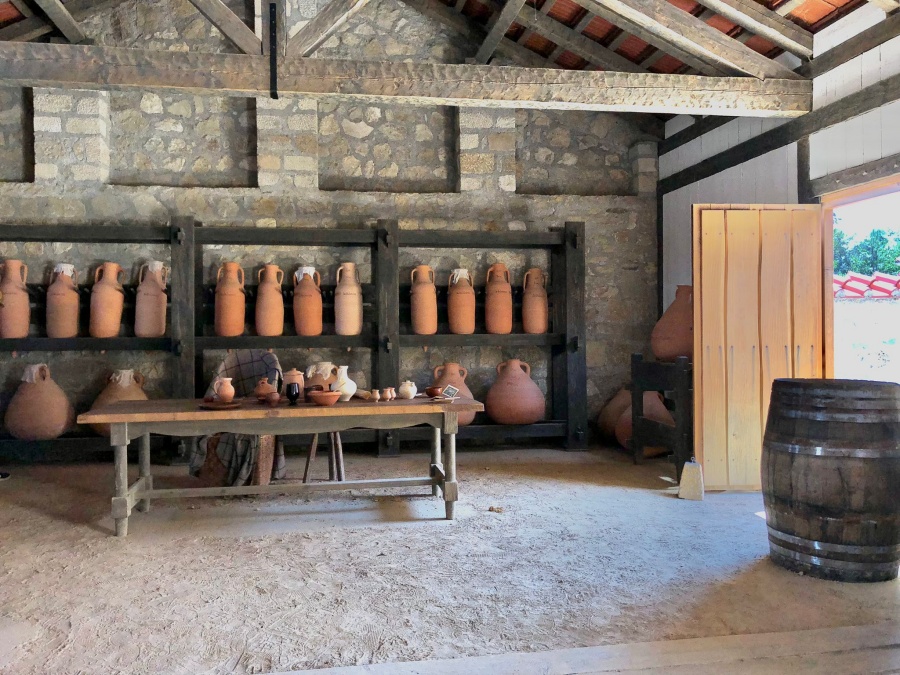 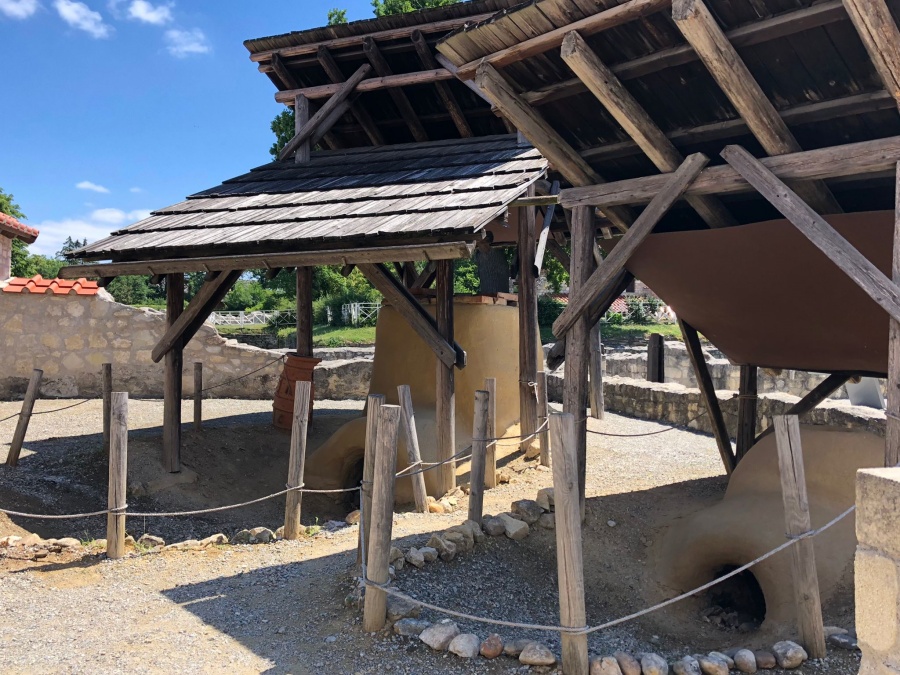 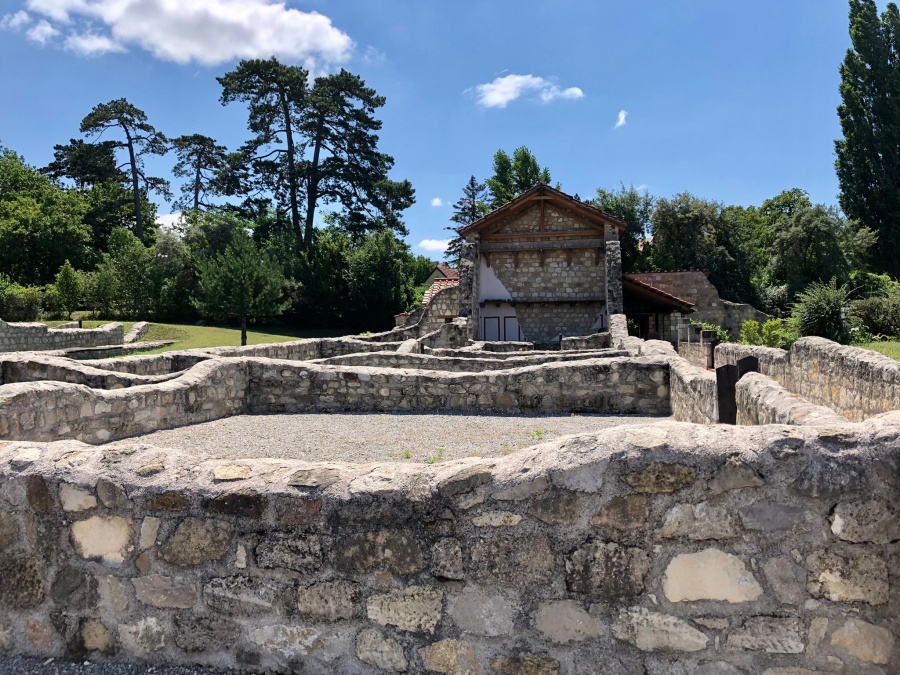 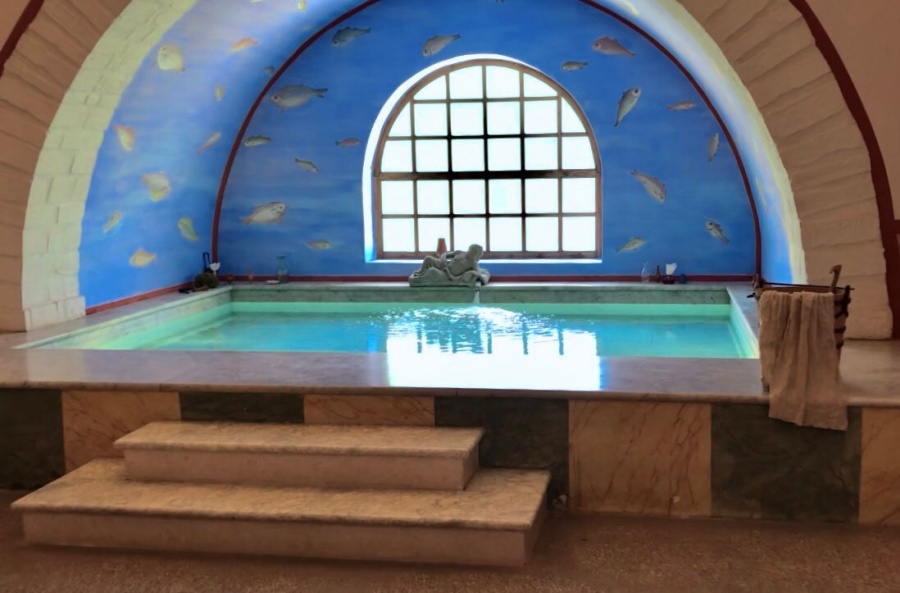 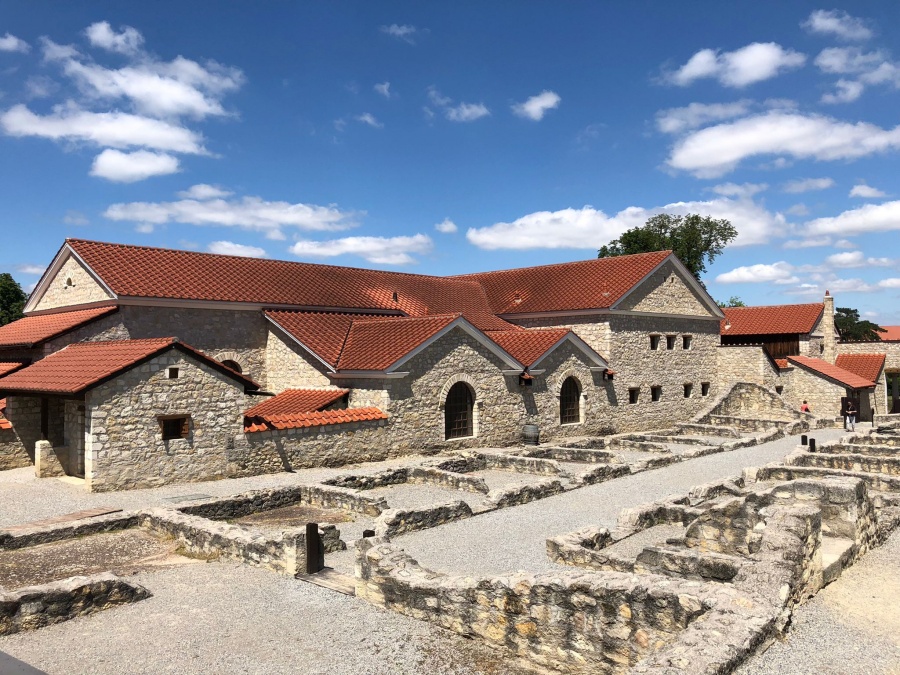 The cost of admission for adults is 10 euros, free access is allowed for a companion of a person with a disability, since during the tour of the archaeological zones, chair users will probably require support, it seems important to me that the museum note this and include it in the price of your tickets. 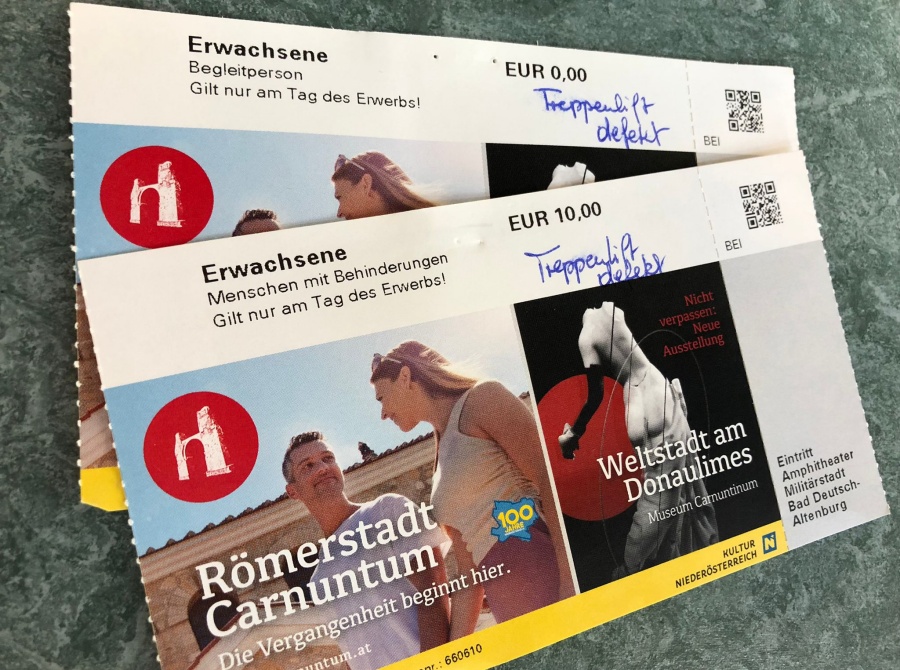 In the park there are also:

II. AMPHITHEATER OF THE CIVIL CITY. The amphitheater of the civil city was located outside the urban settlement zone and had space to hold 13,000 spectators (three thousand more than in the National Auditorium in Mexico City). The walls of the enclosure have been preserved to this day. Entrance to this part of the park is free, the path on foot is a guide for blind people and, due to the distance and height, assistance is recommended for wheelchair users. 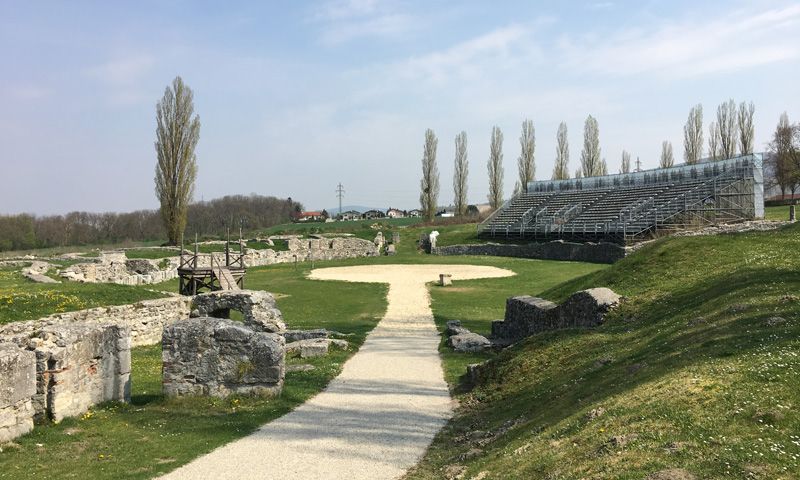 III. GLADIATOR SCHOOL. Next to the amphitheater, the Carnuntum gladiator training stadium was built, made of wood and discovered in 2011. Like the amphitheater, admission is free, it can be reached on foot, it is accessible to people with visual disabilities and it is recommended assistance for wheelchair users. 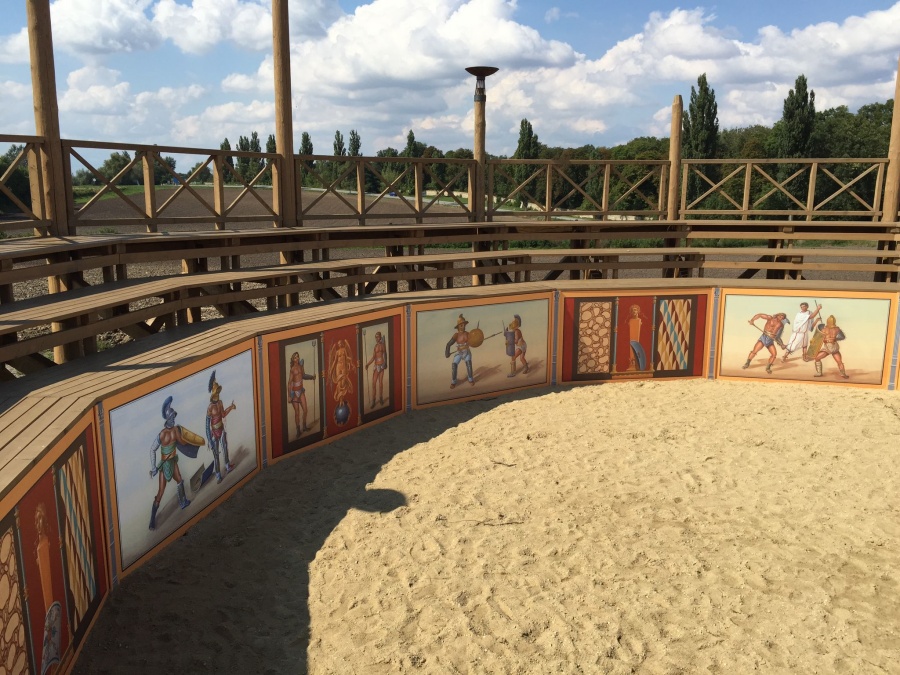 IV. HEIDENTOR. A triumphal arch erected before the city walls was once the symbol of Carnuntum. Free entrance, due to its distance it cannot be reached on foot, it has a parking lot, an information plaque on its history in Braille and the assistance of another person is recommended for the tour of the wheelchair user. 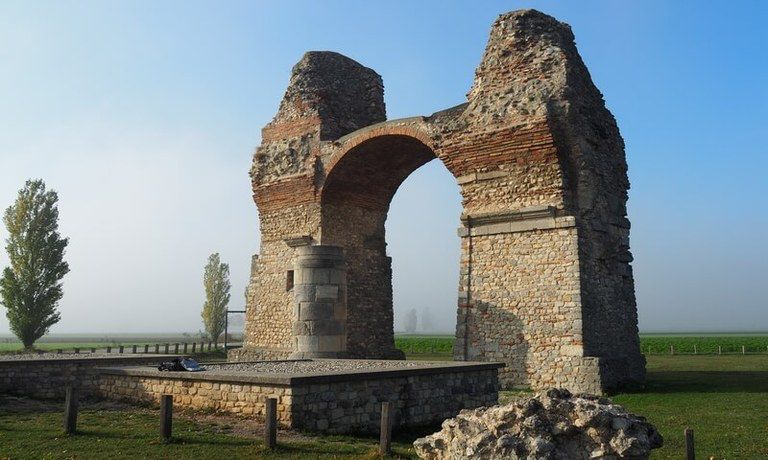 V. AMPHITHEATER OF THE MILITARY CITY. This amphitheater is the only visible vestige that remains of the old barracks city (without being rebuilt). A small exhibition allows visitors to get an impression of the world in which the gladiators lived, even showing a sheet of metal, which experts deduce that it was part of the costumes that the gladiators used during the fights. Entrance ticket required, included with the first leg to the Roman district. Due to its distance it is only possible to get there by car, it has parking, information about the history of the place with subtitles for deaf people and in braille. The entrance, toilet and route are accessible to wheelchair users. 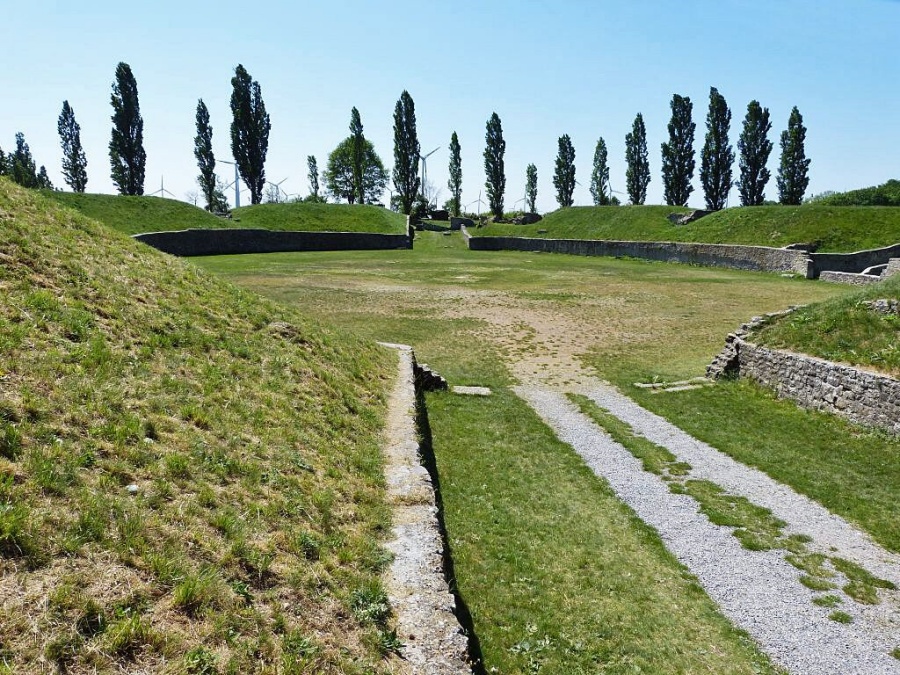 I did not get to see one of the performances that they told me were made with costumes and dialogues from Roman times, but I read that it is fun to listen to the story narrated in the voice of the characters, these performances are usually programmed for school visits. 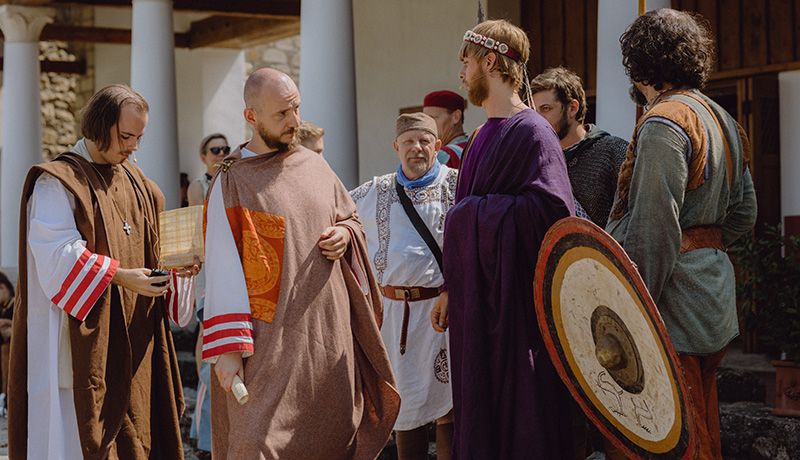 In Roman times it is believed that people with disabilities were not fully included in social life, which is where begging began as a means of survival. I found it interesting to visit this archaeological zone and above all that it has been transformed into a place where all people can walk with dignity and enjoy history.