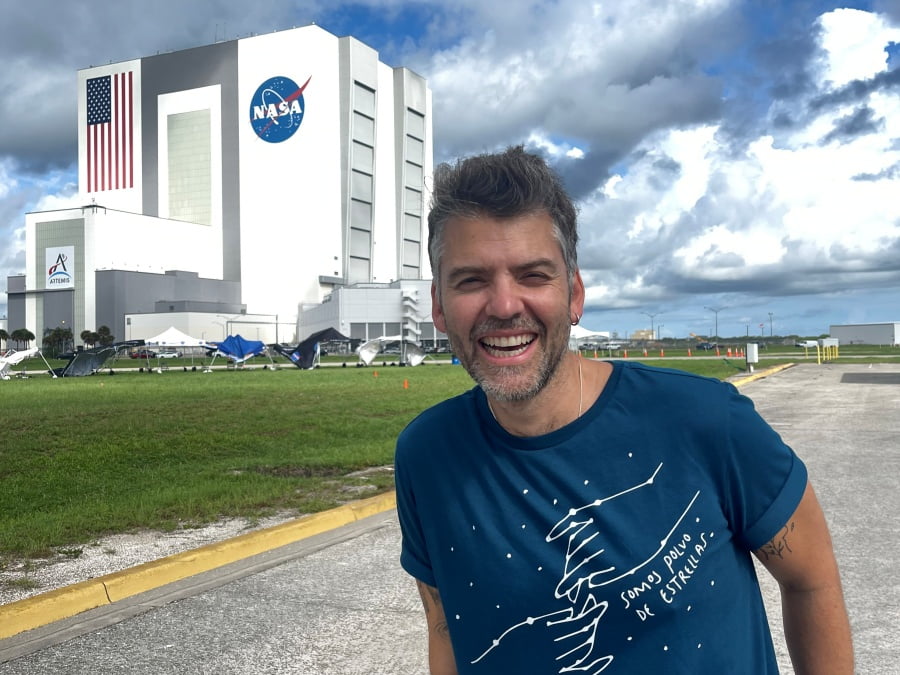 I can’t remember how many times I played that I traveled to the Moon in a spaceship when I was a child, the mattress of my bed or the living room chair became the Moon surface, asteroids and meteorites passed close to me and my whole room was the solar system and an extremely dangerous field of exploration, jumping from one bed to another was like jumping over a crater. I collected soil samples, the blankets were quicksand that I had to tread very carefully (as if there were quicksand on the Moon), the focus of the room was the Sun and the floor was the Earth. Everything was so real, as a child when you play everything is true, the commitment to your own story is total. I liked to play so much that to this day, as an adult, I still play but now my Moon and my galaxy are the stage.

They say that we are constantly manifesting desires and dreams, even without being aware. I think that when I played the Moon I did something right. Obviously I’ve never really been to the Moon and probably never will, but the weekend of August 27-29, 2022 I came as close as I could possibly get to going up there. 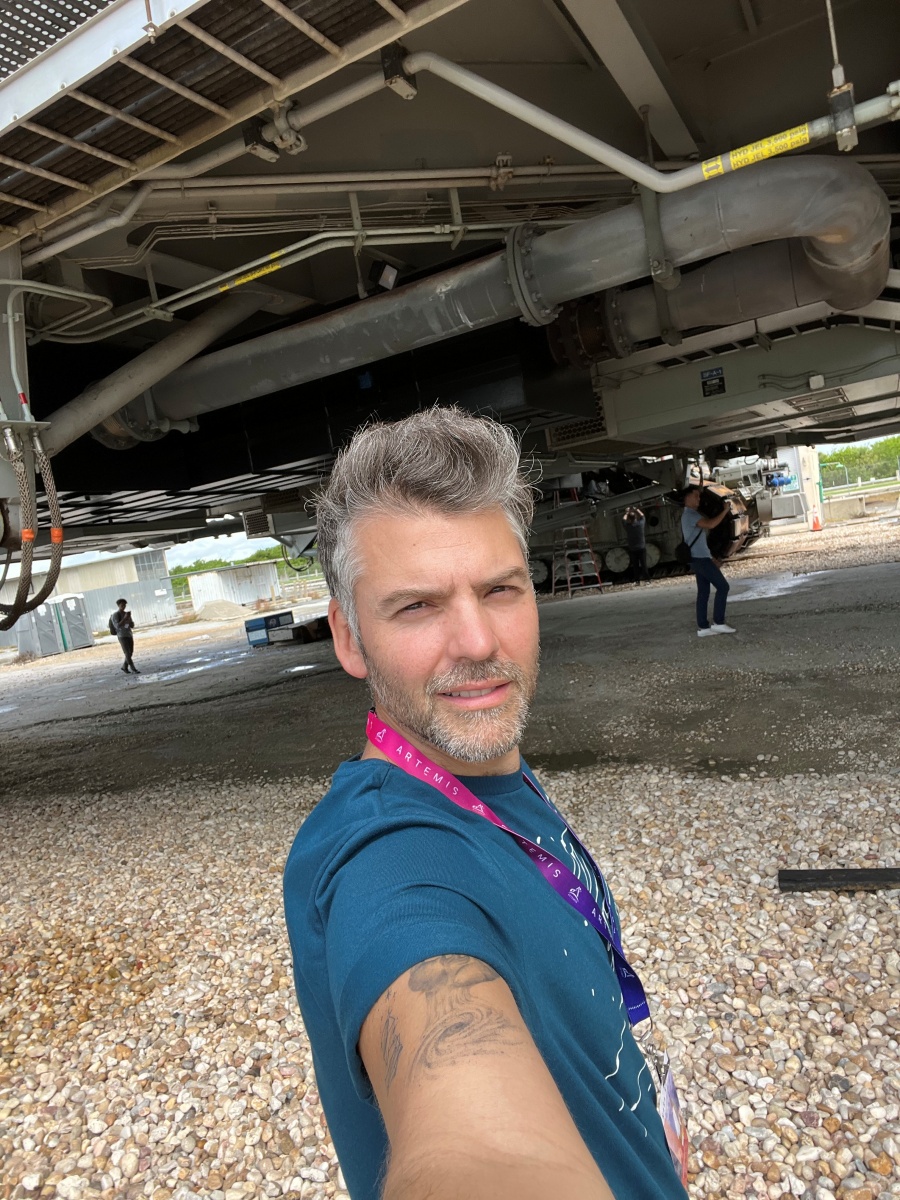 I was selected, thanks to the recommendation of my brother Alan Estrada, by NASA to go as a special guest to the launch of the Artemis I rocket; the first of three scheduled launches in three years and which kicks off the new generation of space exploration. The previous generation was Apollo and he was famous for landing a man on the Moon. Artemis or Artemis in Spanish, according to Greek mythology, is the twin sister of Apollo, and it makes perfect sense, because in the Artemis III ship that will be launched in 2024, the first woman will go to step on the Moon accompanied by the first man of color, hence this new mission bears his name.

Going back to my story, I was selected by NASA to witness the work that an entire team of engineers, scientists, biologists, mechanics, administrators, astronauts, and every position you can imagine, put in over the years to develop new technology and the largest and most powerful rocket ever built, the Space Launch System (SLS) that will take the Orion capsule to the Moon and back (literally, ha!). 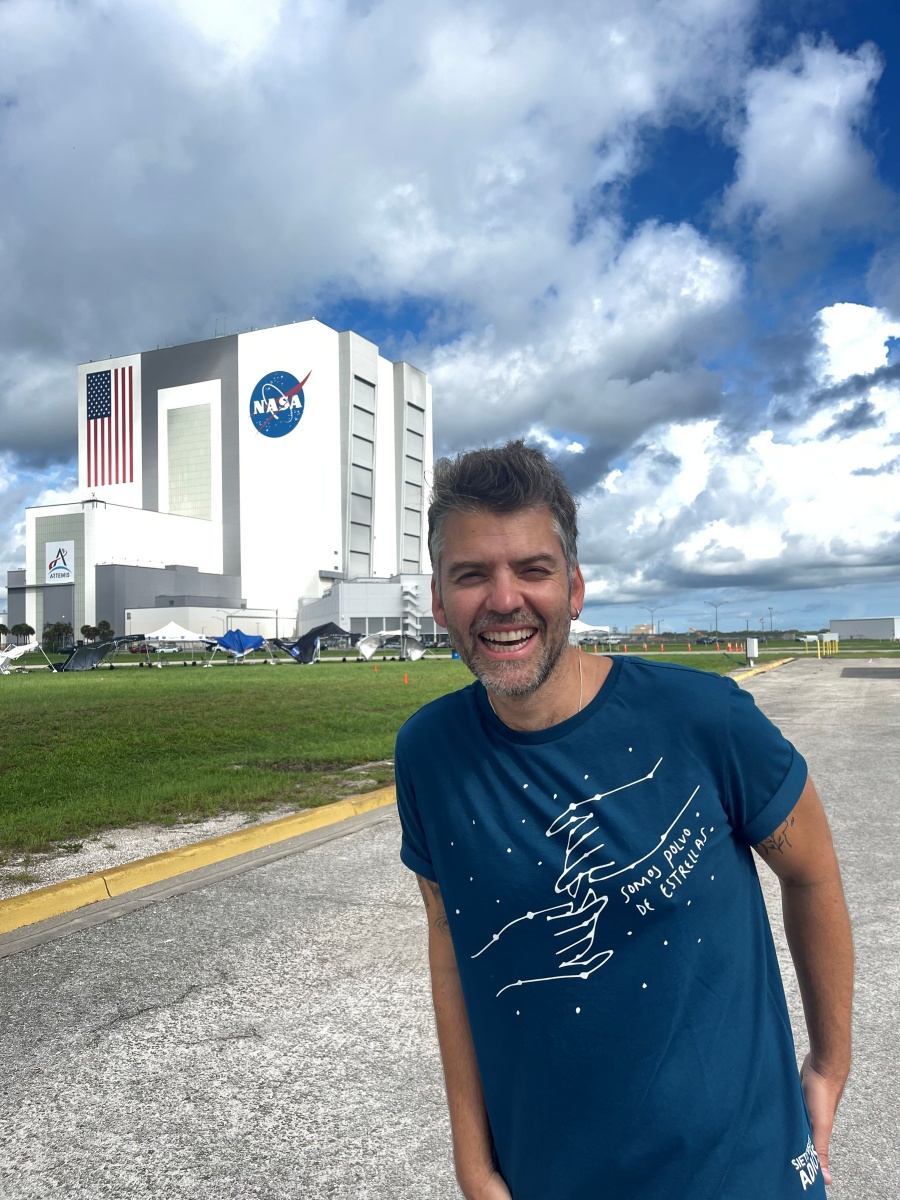 In this first launch there were no human astronauts, there were only three mannequins, two emulating women and one a man who by the way is called Arturo in tribute to us Latinos. These mannequins full of sensors. This launch aims to measure all types of radiation to which a human body could be exposed, resistance of capsule materials, a new navigation and voice control system developed in conjunction with Amazon and Cisco, experiments on how radiation could affect a seed, a plant, food, etc. and also the launch of thirteen mini satellites the size of a shoebox that will be in charge of going into deep space in search of asteroids and meteors and gathering as much information as possible about they.

It will be a mission that will last approximately 42 days if everything goes as planned.

Artemis will become the banner of the new generation of space explorers, because once they manage to take the Artemis III astronaut team to the Moon, they will try to create a lunar base that allows prolonged stay and even be a hub to launch missions. of exploration with humans to Mars, hence the importance of NASA inviting mere mortals like me to spread the information through our social networks and reach the new generation, those young people and children who will be in charge of continuing this exploration and set foot on Mars for the first time in history.

Of course there are many things to be resolved, such as the speed and propulsion force to carry humans that far and back in an acceptable time. Today it would take 69 months to get to Mars, they would have to stay there for 69 months to wait for the planets to realign and 69 months to return, which is totally unacceptable. Possible solutions are already being studied, such as propulsion through nuclear energy.

There are many issues to resolve that of course I couldn’t even explain, but what I can tell you is that I was absolutely amazed at the ability of human beings to create, solve problems and find answers. 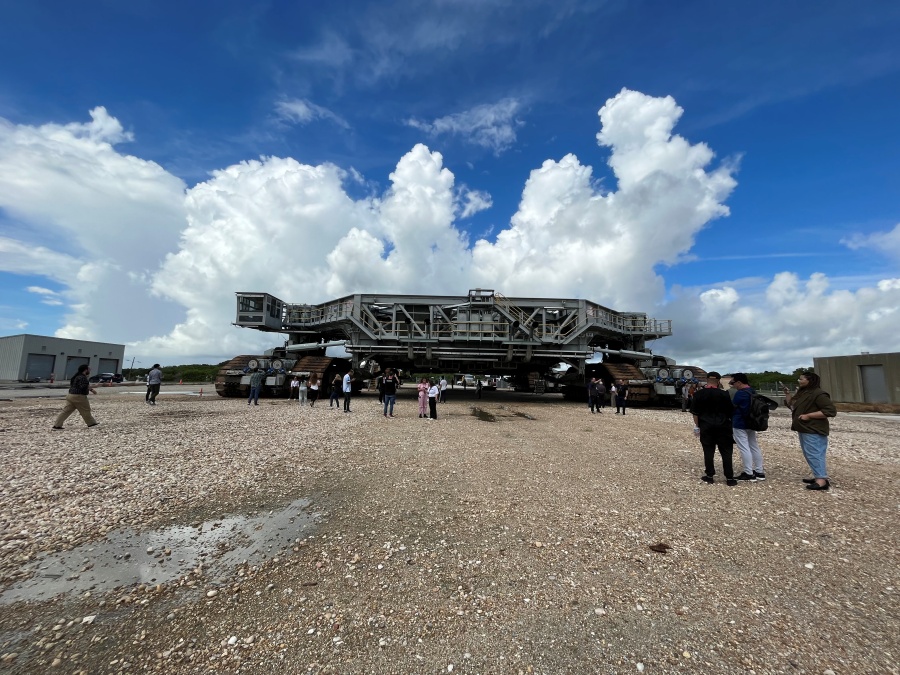 Each of the people who have formed and are part of Artemis are one hundred percent indispensable. I was delighted to see that everything is a team effort, one of the astronauts with whom I was able to speak told us that NASA does not look for individuals, it looks for teams and that is that the passion that each one of those involved has adds up and power to create the most amazing machines and the most sophisticated systems I have ever come across.

A phrase that Bob Cabana, a former astronaut and currently one of NASA’s area directors, said: “The amazing power of people coming together.” He explained to us the importance of speaking, of being listened to and knowing how to listen. No one is smarter than the other, everyone has a different and unique vision that adds to creating solutions. It is essential to know the point of view of each person and therefore the importance of having people of all nationalities, religions, colors, ideologies, studies and knowledge to form a great team of earthlings with a common goal. Only in this way can new paths and solutions be found outside of the conventional. I really liked that NASA is absolutely inclusive. 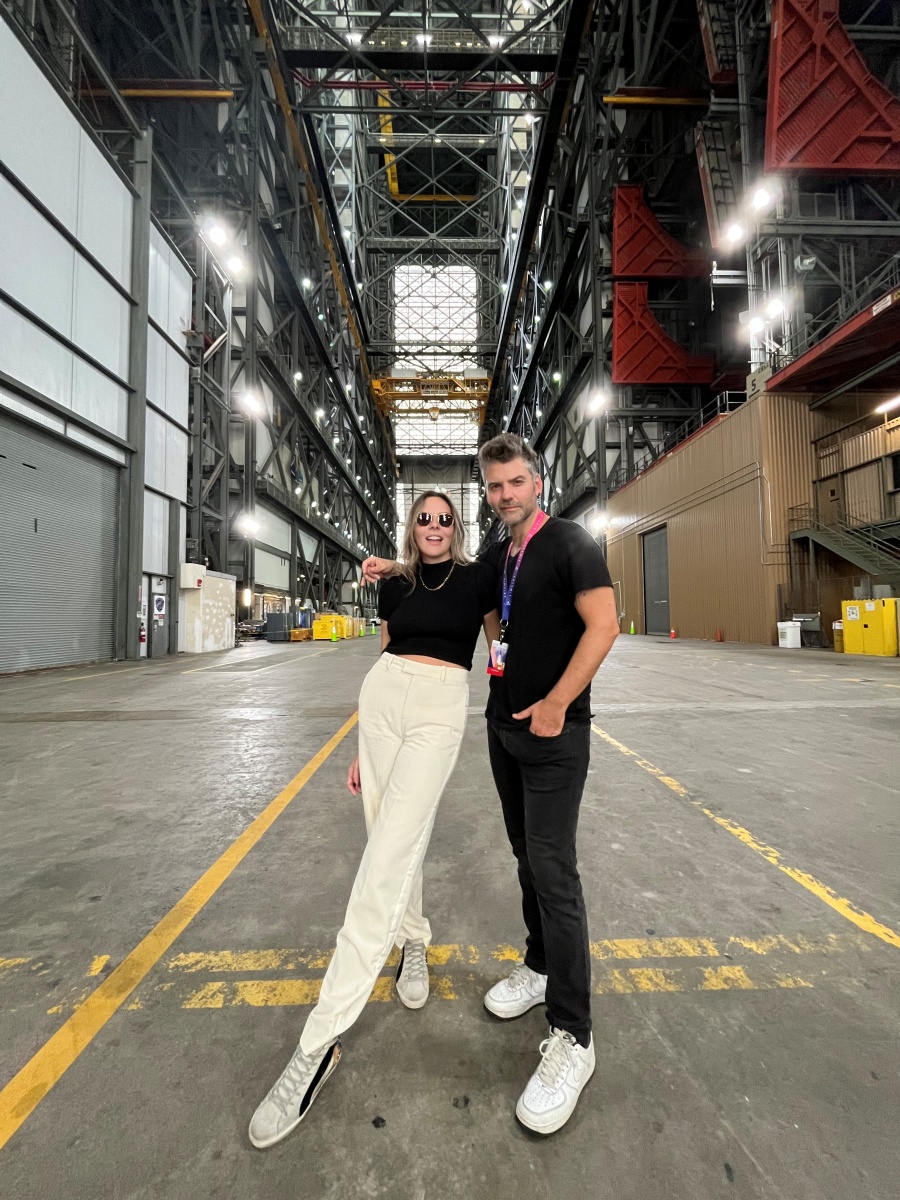 Another thing that caught my attention was that they still retain technology and designs that have not completely changed since the 70s, which confirms that if something works perfectly, it is not necessary to redesign it, for example the shape of the Orion capsule. All investigations and tests have confirmed that its geometry and design are perfect for re-entry into the Earth’s atmosphere. Another example is the CRAWLER, a giant and unique machine in the world that is in charge of transporting the SLS already assembled, from the assembly building to the launch pad. It’s basically a vehicle that moves on eight huge tracks at a top speed of 1 mile/hr and can support millions of tons. A curious fact is that it took 10 hours to move the SLS in a section of approximately 3 miles.

When the day for the launch finally came, we were summoned at 02:00, we were waiting until 08:33 for the window of opportunity to open for the big event. We were able to enjoy an absolutely stunning and beautiful sunrise. The longing and desire to see the giant Artemis I leave for the Moon was palpable in each of the guests. 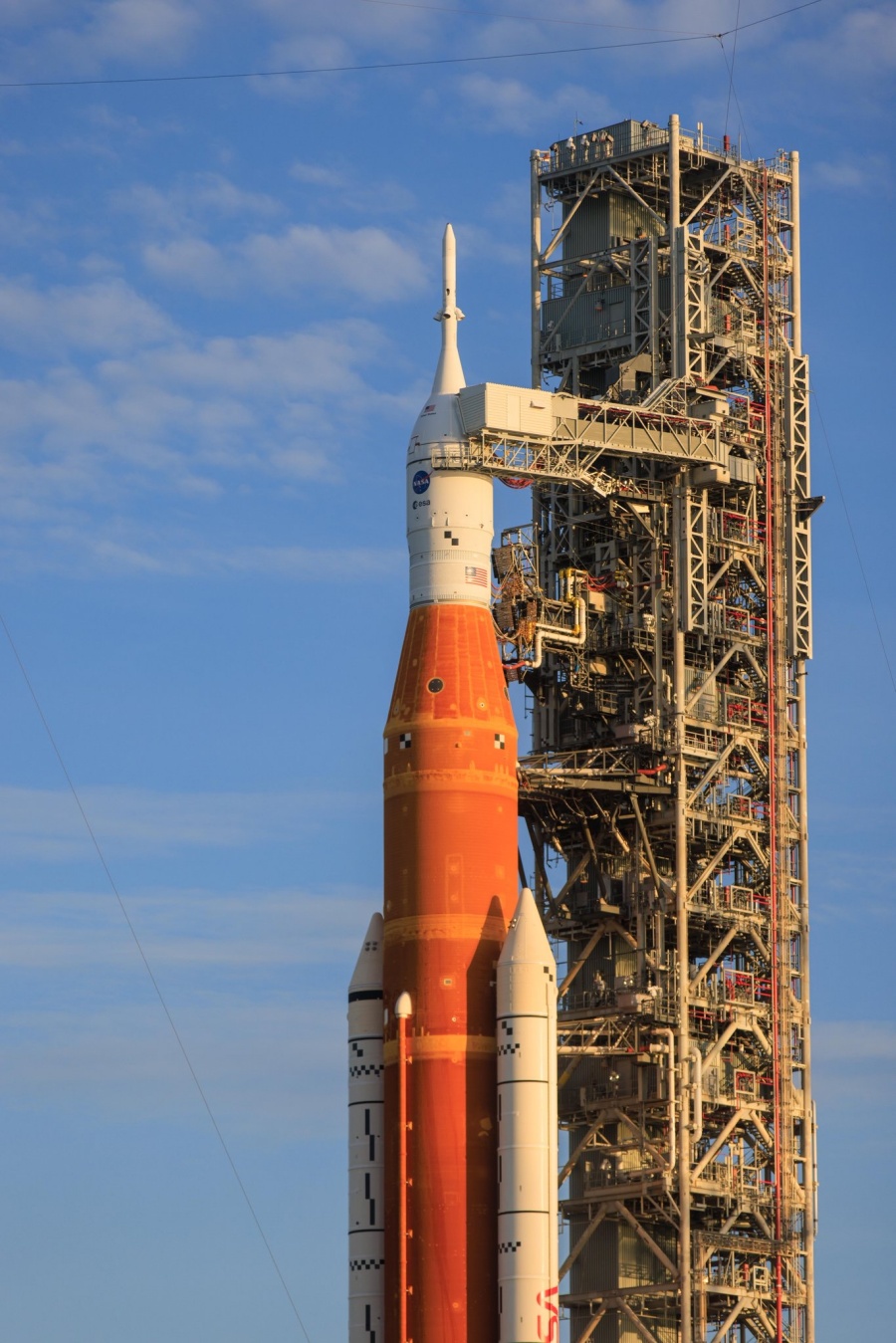 Finally, after a wait of 6 hours and 33 minutes, when the time came we found out that the launch would be postponed because one of the engines was not cooling properly and did not reach the necessary temperature due to a small leak in the cooling liquid. and also due to a delay in communication between the ground base and the Orion capsule. Being a test launch and a rocket that will carry astronauts on board on its second and third missions, it is essential that all the thousands of systems work perfectly. The team of engineers and mechanics did not wait a second to collect data and start with the necessary adjustments.

I did not have the opportunity to witness live the launch that I wanted so much to see, hear and feel, but I was able to remember those childhood days when space was all that mattered to me and I was able to meet first-hand some of the most interesting people .

The new window of opportunity for the next launch attempt will be Saturday, September 3 at 2:17 p.m. I don’t know if by the time this short story is published, the long-awaited launch will have been achieved. 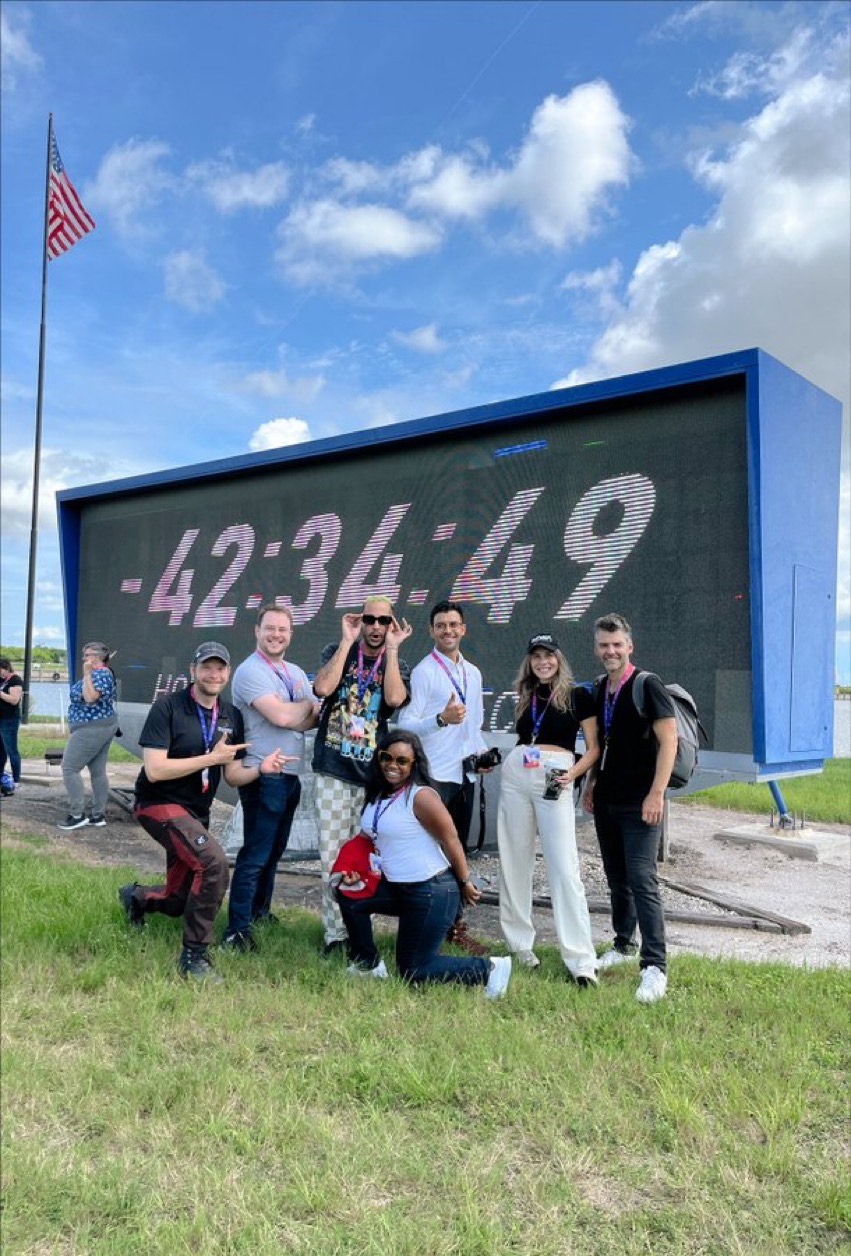 The word that describes my experience at NASA is inspiration. Human creativity and teamwork have achieved such impressive things as being able to travel into space. It is a clear example that if we work together for a common good and the same goal, open to listening to each other and joining forces, we can achieve what seems impossible. As my dear friend Freddy Ortega says: “we are all good, but not as good as all of us together”. Let’s not forget that we all have an extremely important role to play in each project we carry out, no one is more important than the other regardless of the work that corresponds to them, the hands of a clock are as important as the proper functioning of the gears that will move them and in the game of space exploration, whether in the room, in the room, on stage or at NASA, all the human pieces are key to being able to create and tell the story.